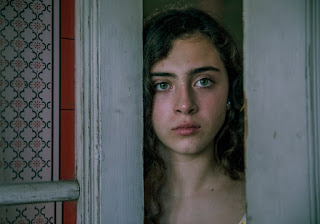 Director Laura Jou is to be the guest of Ramon Lamarca, the programmer of the Camera Catalonia strand at Cambridge Film Festival, for a Q&A following the film

The #CamFF synopsis, duration and other details for the film can be found here, and it screens on Wednesday 23 October [in Screen 2 at APH (Festival Central)] at 6.00 p.m.


[...] Wouldst thou have that
Which thou esteem'st the ornament of life,
And live a coward in thine own esteem,
Letting 'I dare not' wait upon 'I would',
Like the poor cat i' th' adage ?

If one were to mention other film-adaptations, such as My cousin Rachel (2017) [adapting Daphne du Maurier], Oscar and Lucinda (1997) [Peter Carey] or The Go-Between (1971) [L. P. Hartley], they are illustrative only, in cinematic terms, of a certain type of trajectory - in no way do they limit or define Laura Jou's playfully colourful La vida sense la Sara Amat (2019). Quite the opposite, because the allusive qualities of the script and the film-making, the use of the diurnal rhythm of scenes at night and by day, and the liveliness and crispness of the cinematographic image - they all make what is a sort of twist on Scheherazade, and what Scheherazade's situation and story-telling might fully signify*, wholly fresh.

Therefore, a film-reference such as The Miseducation of Cameron Post (2018), itself quite different from Sara Amat (please also see below), is just as relevant. For here, too, there is a sense of a time, and (in our twenty-first-century terms) both of its limitations and yet also permissions, and an (equally constructed**) sense of place - it might likewise usefully put one in mind of the locale envisaged by James Ivory, in his script for Call me by your Name (2017). But, as Sara Amat itself might be seen to do (depending how one 'reads' it), one is here making suggestions, not giving exact Reasons to Watch, whereas, just in a few jottings (after a first viewing for this preview), some of them certainly are :

* Tightly edited, with neat use of jumps of perspective within a scene, as well as cutting-away to external shots - we do not ever stay with a scene or shot longer than we need to

* Mirrors and making use of light


This film dwells with what it is like to keep a secret, and what it is like when one learns that others have been keeping secrets ; not unconnectedly, its stuff is the things that have been left behind (whether a book, or pairs of shoes), and the question what purpose it serves, and for whom, to continue with something when one is tired of it.

Others, such as Henrik Ibsen or Mike Leigh, have made secrecy about the past, and especially the destructive potential when it is discovered, prominent themes in their work, but Sara Amat’s protagonists*** face it with pragmatism, as something verifiable that simplifies the need to perpetuate pretence : albeit the content and context are definitely more adult, this is a strong point of connection with The Miseducation of Cameron Post (2018) (and with director Desiree Akhavan's work in her earlier film Appropriate Behaviour (2014)).


At the centre of this film is what, typically, in a slow movement in a Sonata or Concerto (or even some intimate central section of it), might feel like its emotional heart : taking the example of J. S. Bach's so-called Italian Concerto (in F Major) [played, in that YouTube link, by Glenn Gould], BWV 971, the inner, tender movement - amongst all that one beautifully listens to in the composition (if one likes Gould) - may be what seems to matter most to the composer (or performer).

Not that Life without Sara Amat (2019) cannot be seen, more obviously, to engage with other topics - the literal and other distance that there is (and which Pep desires to maintain), between his unseen parents and how and where his grandmother lives, or, connectedly, of growing into or occupying a different place there in one's circle of friends or in their esteem.

* Time, and the passing (or implied passing) of Time, is sometimes embedded into the stuff of stories, dreams, and the best of cinema - for example Orphée (1950) (or, not unrelatedly, La belle et la bête (1946)).

** Since film-making has an almost innate need to mix and 'mash up' separate locations to create a new reality - in a film as pleasingly made as Colette (2018), locations such as parts of Kecskemét, Budapest, can be passed off as France (or a farm in Witney, Oxon., used for the library / study scenes). (Let alone in one like Bel Ami (2012), where it is, often enough, too obviously London, not Paris...)

*** #UCFF does not subscribe to the belief that there can never be more than one protagonist.

Unless stated otherwise, all films reviewed were screened at Festival Central (Arts Picturehouse, Cambridge)
Posted by The Agent Apsley at 11:48