I suggest that we respond withGnome at her**, since time is an illusion, and - as Russ himself, at least twice, said in print*** - Nothing is forever. [Nothing, except love, as the waves and particles of Russ' novel Pilgermann, as Emmae has reminded me, suggest... ?]

The birthday of novelist Russell Hoban, who has also written and / or illustrated children's books, such as Jim's Lion, The Mouse and his Child, or 'the Frances books' (e.g. Bread and Jam for Frances) :https://t.co/cbJGdx1fnR#CelebrateHobanAt95 pic.twitter.com/LTzY3skdOb

* The Slickman A4 Quotation Event, named after its initiator, Diana Slickman, and during which [on (or for ?) 4 February] a distribution of quotations from the works of Russ is made.

Depending on the assiduity of the participants, the 4ations (as they are called) are usually shared via http://www.russellhoban.org/sa4qe, on or after that date.

Unless stated otherwise, all films reviewed were screened at Festival Central (Arts Picturehouse, Cambridge)
Posted by The Agent Apsley at 06:54 No comments:

¹ The date of this full-page ad in @theipaper, as bought at Tesco (along with the pizza) that day.

² And, if I hadn't got a C card (when some object to having one on open-rights principles, etc.), to induce me to sign up - so a double-benefit of pushing items and recruitment ? https://t.co/yHxF16xRCZ pic.twitter.com/DiJ32PYtqy

Posted by The Agent Apsley at 19:33 No comments:

Nuance and idiom : A conversation about vocabulary with Roland Clare

Nuance and idiom : A conversation about vocabulary with Roland Clare


Nuance and idiom : A conversation about vocabulary with Roland Clare

Unless stated otherwise, all films reviewed were screened at Festival Central (Arts Picturehouse, Cambridge)
Posted by The Agent Apsley at 21:53 No comments:

All ways and at the height of their game, power-play between Ricky Roma (Al Pacino), Shelley Levene (Jack Lemmon), George Aaronow (Alan Arkin), Dave Moss (Ed Harris) - inventing not as if, but since, their lives depend on it, taking each other on, and trying to dodge wild balls !

* Tarantino may win on the rate of expletives, but these guys make every one sound heartfelt and personal. https://t.co/XmhbtYfBq5 pic.twitter.com/8OXU0xnVlc


As I found to-night (with Glengarry Glen Ross (1992)), there's nothing quite as good as the greatness of a film that one already knows. :)

Posted by The Agent Apsley at 19:43 No comments:

The five- and three-hour versions of Fanny och Alexander (Fanny and Alexander) (1982) : Some points of comparison (work in progress)

The five- and three-hour versions of Fanny och Alexander (1982) : Some points of comparison


The five- and three-hour versions of Fanny och Alexander (Fanny and Alexander) (1982) : Some points of comparison (work in progress)

'When Alexander¹ meets Ismael², in the house of his Uncle Isak³, and Ismael engages him, is one of the most electric moments in cinema.' Discuss.

² Vitally, by Stina Ekblad, in this brief moment as Ismael Retzinsky.


Noted from re-watching both versions, on DVD, starting from Christmas Eve 2020

* A shorter sequence (?) with Alexander, for some reason not realizing that he is alone at home, and with the statue moving

* No sad moment with Helena [Ekdahl], his grandmother, showing the woman behind the maternal 'front', before the family arrives from the theatre, and anticipating her late-night Christmas-morning tête-à-tête with Uncle Isak [Isak Jacobi, her former lover]

Gunn Wållgren is *so* wonderful in Fanny och Alexander (Fanny and Alexander) (1982) !


* No build-up, in the auditorium of the theatre, to the nativity-play, and, after his brother Gustav Adolf ('Gusten') has processed with the flaming punch-bowl, a shortened speech by Oscar

* No time spent with the Christmas meal, after their broher Carl (who. chivvied by his wife Lydia, arrive late), so the famous dance around the building becomes more prominent / significant

* Shorter bedroom scene with Gustav Adolf and Maj, to which a much shorter one with Carl and Lydia, arguing in their bedroom, first cuts, then cuts back

* A shorter rehearsal scene at the theatre, when Oscar is playing Hamlet's father's ghost

* Fewer (?) early signs of Alexander's reluctance to see his dying father ; no shots of the incidentals of Oscar's dying (e.g. the dirty pail and cloth), and ; fewer death-bed words from Oscar (including to his wife Emilie (Fanny and Alexander's mother) about the future management of the theatre

* More violent swearing from Alexander, to Fanny's amusement, and for longer on exiting after the grand funeral (which we have not heard, in this version, the dying Oscar say that he did not want)

Even Ingmar Bergman's spiritual phony, Bishop Edvard Vergerus*, with his slimy doctrine of 'hard love', could learn lessons from how #Frump cheats, bullies, but positions himself as a victim ?

* Jan Malmsjö gave us the man whom we love to hate [in Fanny och Alexander (1982)] ! pic.twitter.com/SeJ0bqrtdN


* A shorter time (?) with the Bishop and Alexander about Emilie's having heard news of Alexandr's stories, at school, about having been sold to the circus

* A shorter duration (?) to Emilie's first visit to the Bishop's palace, with Fanny and Alexander, and meeting his mother, sister and aunt, and the servants

* Is there a sign that the Bishop is more cut to the quick by what Josephina reports Alexander telling her (guilt, or being bothered how Alexander knows ?) ?

* No ghosts in the attic, and just going directly to when Emilie wrests the key to it from the Bishop's sister and rescues him

* After Isak has smuggled the children out in the chest and taken them to safety, no confrontation of the Bishop by Carl and Gunsten

* A shorter conversation, both between Emilie and the Bishop, when she is leaving the palace for good, and then with the visiting police officer, who tells her what has happened 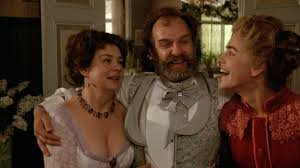 Posted by The Agent Apsley at 11:07 No comments:

More delightful than consequences (even the Surrealist version ?), or than many another old parlour- or nursery-game, AOL's version of mix'n'match* ? :

One of these people¹ has much more reason to ask noisily whether the other ever shuts the fuck up...

² *If* meeting, that is, any reasonable criteria by which personhood is judged...#Frump pic.twitter.com/Kh2GQduUOS


Facing each other, as if longing not to be separate ? pic.twitter.com/JYQDwXMMmi

¹ The original set of DVDs was 'lost by lending'. (Someone had put Reggie on YouTube, but it was flipped right to left, and otherwise not of good quality, or any pleasure to view.)

² The intended weekly instalment for this meltdown autumn / winter.


The 'Yes'* men of The Fall and Rise of Reginald Perrin (original Leonard Rossiter, bien sûr), or the collaborative screenwriting (with Harvey Keitel) of Paolo Sorrentino's Youth** (2015)... :https://t.co/KGiN100zhF

Leonard Rossiter tells his deliberately ill-assembled guests what they would have eaten and that he's instead sent £20 to Oxfam :

Episode 4 of the first (original) series of The Fall and Rise of Reginald Perrin.


The pub to which Miss Pershore (Charmian May) hopes to lure fellow lodger Donald Potts (Reggie, in disguise) is The Clytemnestra Arms.

* Then again, in the names of Elizabeth and Reggie's grandchildren, there's that early reference to antiquity / Everyman with Adam and Jocasta.