Musings after re-watching The Third Man (1949)

Musings after re-watching The Third Man (1949)


Musings after re-watching The Third Man (1949)


Some of us were with The Third Man, again, on Sunday :

Trevor Howard, first seen in a patent-leather jacket or coat*, appears and behaves incredibly camp, such that his offer to Joseph Cotten might resemble a gay pick-up... 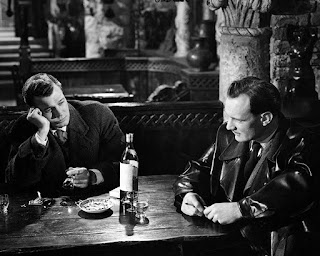 Can he shed light on the question that we immediately get whisked away from* - who did invite Holly to Vienna, and why, therefore, is he really there ?

* One that he never stops / allows himself to stop to ask himself.

Posted by The Agent Apsley at 17:21 No comments:

We Are Undefeatable : Some Tweets

We Are Undefeatable : Some Tweets - anyway who said anything about 'being defeated' ?


We Are Undefeatable : Some Tweets - anyway who said anything about 'being defeated' ?


Some will relate to 'Being active with a health condition means every small victory counts' - that's fine - but it could turn others off ? :

I may not identify with a condition diagnosed as schizo-affective disorder, but my experiences, and words used to describe them, do matter https://t.co/jOWaMLNOTY
— THE AGENT APSLEY #ScrapUniversalCredit #JC4PM2019 (@THEAGENTAPSLEY) September 2, 2019

Couple that with 'little' or 'small' victory (straight from the would-be encouraging vocabulary of an OT, and almost a contradiction in terms* ?), and how many people feel straightaway patronized ?

* Victory, except for Pyrrhic victory, is the grand language of state, politics
— THE AGENT APSLEY #ScrapUniversalCredit #JC4PM2019 (@THEAGENTAPSLEY) September 2, 2019

Unless stated otherwise, all films reviewed were screened at Festival Central (Arts Picturehouse, Cambridge)
Posted by The Agent Apsley at 03:00 No comments: