Self-killing : the ultimate act of self-harming ?

The word suicide itself defies us : if we know the word homicide, we are still stumped without a knowledge of Latin that sui means the particular, the self.

But the word gets heard - and used - often enough for us to know the meaning, without needing to know that it is an act of self-killing, and it even appeared, when Céline Deon took a career-break (for motherhood ?), in a French headline sa suicide incroyable (I quote from memory). The word, just now referring to 'career suicide', is with us in such manifestations as 'financial suicide' and 'intellectual suicide', and, if I am honest, it has become a little too cheap for my liking, a glib notion when what is embodied is that of choosing to end one's life.


And there we come against the taboos, the misconceptions, the prejudice.

We all know about 'suicides' (as, equally cheaply, those who carried through that choice are sometimes unfeelingly called) not being buried 'in consecrated ground', and so we have a lasting sense of the shame and crime that ecclesiastical law deemed this act to be. We will know also of the shame and penalty of bastardy, of 'being born out of wedlock', and the stigma is quite similar in origin, the shame of the state of affairs, but different in how the twentieth century came to view illegitimacy and suicide :

Legislation enacted by the UK Parliament in 1925 repealed the consequences of being born to parents who happened not to be married, and, in my view, the prevalence of people living together in the last thirty years suggests that little or no societal disapproval attaches to being unmarried parents (as against a young single mother, it must be said). The inability to inherit in certain situations had been swept away by the reforming legislation, and, with it, the negative and hampering limitations of being illegitimate, a notion also done away with. (All that survives are the feeble jokes about doubting my parenthood when the speaker has been called a bastard, etc.)

With suicide, we had to wait until only fifty-two years ago for Parliament to pass the Suicide Act 1961, and thereby decriminalize someone trying and failing to kill him- or herself : before then, because the act was a criminal offence, someone known to be a survivor of the attempt was open to prosecution.


I know only when the two changes that I refer to, not (for want of having researched the matter) what the policy and other considerations were that led to the disparity in timing : more than 35 years to correct the injustice of being open to prosecution for wanting to end one's life, as against remedying the things that a person born to an unmarried couple was prohibited from doing.

In both cases, the history of the law's disapproval of illegitimacy and of suicide lay in Christian theology, with a Biblical notion of birthright (and of the primacy of the legitimate first male child), and a belief that suicide was the unforgiveable sin of blasphemy against the Holy Spirit. Yet (as I have said), why decriminalizing suicide was less of a priority is not known to me : by analogy, I can say only that, under the law prior to the Mental Health Act 1983, being an unmarried mother made one liable to be detained under the predecessor Act, which is an almost incredible time for repealing such a policy.

Looking back to Greek mythology, whatever we think of Oedipus, it is clear enough in Sophocles' The Theban Plays that there is a taboo against suicide. There were also The Fates, whose Greek name (Moirai) means 'the apportioners', from which we partly get the idea of an allotted span on Earth, maybe three score years and ten : the strand representing each human life was spun by Clotho, measured out by Lachesis, and cut to length by Atropos.

You have your allotted span, and you don't seek to defy the Gods by prematurely shortening it, because there are penalties, if you do. Christian doctrine that this unforgiveable sin was that of suicide involved similar notions that God determines the length of one's life.


All of this history feeds in to the attitudes towards - the words used to describe - suicide now, and many object to the words 'commit[ted] suicide' on the basis that 'to commit' suggests a criminal offence. Whether that usage is a real hang-over from the days before the 1961 Act, I do not know, but it is not unlikely.

All in all, the public is so confused by the messages about suicide, assisted suicide, whether the former is a crime, or whether either is an act of courage or of cowardice (no neutral view here), that is no wonder that those who feel death to be the only way out are hurt and hindered sometimes by them : amongst which, they have the fear of being thrown into Dante's Inferno, of the stigma that will attach, and of being perceived as having acted selfishly.

Too posh to answer the telephone ? [work in progress]

Some comments [work in progress], following a screening and Q&A (as film-maker in residence at The University of Cambridge's Centre for Film and Screen), of Lucrecia Martel's La Ciénaga (The Swamp) (2001) 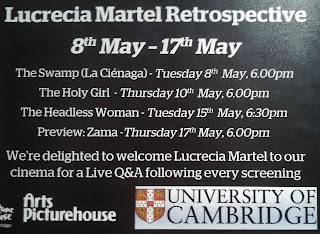 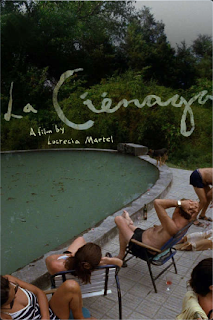 If a film-maker [Lucrecia Martel] sets out to make a film that defies some cinematic conventions, it seems to be odd to want to know if the Q 'Could Chekhov have made it ?' is a compliment
— THE AGENT APSLEY (@THEAGENTAPSLEY) May 8, 2018

Although it was not meant equivocally, it seems ironic for a writer / director who deals in ambiguity / opacity in La Ciénaga (The Swamp) (2001) to want to know if the comparison is meant kindly - if then evading it largely, by saying that Chekhov's work wasn't set in Argentina ? https://t.co/4eptbvEH9x
— THE AGENT APSLEY (@THEAGENTAPSLEY) May 9, 2018

Yet who necessarily wants a film released in 2001 to be likened to a play written 98 years earlier ?

Not if, now, one is laying store by innovation - even in a film that stays internally consistent and linear ?
— THE AGENT APSLEY (@THEAGENTAPSLEY) May 9, 2018


'You were all drunk'

It has been firmly postulated to be a feature of Andrei Tarkovksy's work that where, say, one sees Fire, the remaining Four Elements (of Earth, Water, and Air) can be found contiguously, but which is a pattern that one might otherwise overlook. In La Ciénaga, whether or not one can seek out the others in proximity (or they are simply pervasively present), one could impose - with some slight 'fudges' - an order on various recurrences to make a new Four Elements :

* Or 'Glass' could be an element in its own right, and substitute for 'Air' - though the latter is palpably there, as when

Unless stated otherwise, all films reviewed were screened at Festival Central (Arts Picturehouse, Cambridge)
Posted by The Agent Apsley at 19:41 No comments: 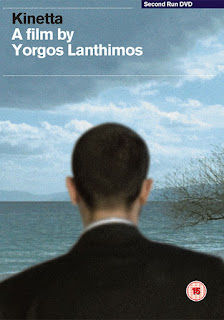 Ideally - but very fittingly - the DVD doesn't decide to come off its spindle, 35 mins in, and appear jammed... :)

Very interesting story-telling, almost without words, so far - and confusing what is and isn't being staged and / or filmed !
— THE AGENT APSLEY (@THEAGENTAPSLEY) May 2, 2018

As one would want from Yorgos Lanthimos, not pressure-of-speech-type chatter, but a quiet, observational, experimental, and often just plain odd film - avoiding the drama that seems to jar in, and mar, the films in English ? :https://t.co/MCQxBzaxzehttps://t.co/HjgMZCu99B pic.twitter.com/m12wwi7IVC
— THE AGENT APSLEY (@THEAGENTAPSLEY) May 3, 2018

All better than Deer - or Lobster !