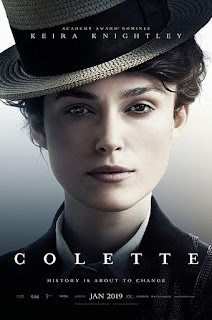 As if (even if a novel, etc., may begin with lines conceived to start it) a work's just written wholly linearly - nothing that's out of sequence (even if only off the page).

No matter : there's enough that shines here, even if we know that we're going to be in Colette's corner !
— THE AGENT APSLEY #ScrapUniversalCredit (@THEAGENTAPSLEY) November 1, 2018

A very full Screen 1 at Festival Central [@CamPicturehouse] just watched, held by a script that was full of Stoppard-like wit and which evoked real laughter and response - and with some fascinating original scoring / playing by Thomas Adès, alongside @DominicWest as wicked Willy.
— THE AGENT APSLEY #ScrapUniversalCredit (@THEAGENTAPSLEY) November 1, 2018

Unless stated otherwise, all films reviewed were screened at Festival Central (Arts Picturehouse, Cambridge)
Posted by The Agent Apsley at 13:16