Am I my brother’s keeper ? 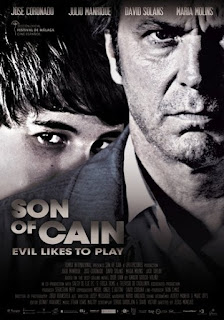 As with the version of pool being played in Scorsese’s The Color of Money (1986), one does not need to know about the winning moves of chess to watch this film : one is not required to understand them, although it features chess.

The film invites comparison with Good Will Hunting (1997) (where, as a viewer, one does not need to understand mathematics) for a relationship that is at its centre, that between Nico (Nicholas Albert), played by David Solans, and Julio Beltrán (Julio Manrique), even down to the fact that the motives of both participants in the therapy are mixed : Will Hunting (Matt Damon) is effectively blackmailed into it, and his client, passed to him in desperation, is hardly what Sean Maguire (Robin Williams) had been seeking from Dr Lambeau’s contact.

This is an adaptation of Ignacio García-Valiño’s novel, and its evocation of Cain, the first murderer and the one who gave his name to a mark, deceptively plunges us into what apparently concerns us, some mistake with a contract, and attending a posh business party, where the daggers (or the excuses) may be out.

Dream-laden footage of gently curving wide roads in the suburbs have already given us a notion of this sort of milieu (as against the narrow streets where Beltrán’s practice is located), yet it is really about coming home to the shock and uncertainty of an apparently bloody incident, and with a trail downstairs and into the very heart of the grand cliff-top property where the family lives. Nico’s seeming lack of care, and even taunting of his distressed father Carlos Albert (José Coronado), ends up with the latter calling a chance contact for whatever help there is, short of putting Nico in the reformatory.

We see greater evidence of Nico’s provocations of and angry outbursts at his father, not softened by the Mahler adagietto playing in the car during the scene, and we sense that his mother Coral (Maria Molins) thinks him the more and more lost, if he does not get help. Contrariwise, everything – including what Andrew, a respected former colleague, has to say – has been telling Beltrán not to commit himself to the approaches that the family are making, and to say no.

Yet, in his effort to see how he can assist, he is as driven as J. J. Gittes in Chinatown (1974), and takes the chance of even involving Andrew against the latter’s better judgement – as for Gittes, does it also represent a challenge that, for reasons of his own, Beltrán cannot resist ?

Seeing his interactions with others, such as the staff at school or even his own sister (Patrícia), who manages the practice, it is clear both that he dispenses with the formalities, and that he does not suffer fools gladly : he has time for Nico for those same qualities, and for having a very high IQ, as well an ability for chess…

Classifying this film as ‘a thriller’ misses the richness of chess as a metaphor, not least how Andrew’s (Jack Taylor’s) lavish premises with a covert entrance are fully enlivened by Jesús Monllaó’s direction, where Alice’s sense of another world (through the looking-glass, and with its own rules), and of competition on equal terms, are evoked again and again*. (Here, there is even a little twinkle of Hogwart’s, as of the magically gifted…)

There is also a competitive gesture that makes Will Hunting’s therapy a challenge to Maguire, and which figures in Beltrán fascination for trying to fathom Nico. As Son of Cain unfolds, with its deliberate play of light and dark spaces, we will find that, in this sense, it aspires to what we most admire about Hitchcock’s best suspense, that of a taut unwinding, as of a spring.

* Just as Scorsese did, as his film built to The Nine Ball Classic in Atlantic City : the epitome of The American Dream.

Unless stated otherwise, all films reviewed were screened at Festival Central (Arts Picturehouse, Cambridge)
Posted by The Agent Apsley at 15:37