BBC One's Who Do You Think You Are ? : Paul Merton

BBC One's Who Do You Think You Are ? : Paul Merton
More views of - or before - Cambridge Film Festival 2019 (17 to 24 October)
(Click here to go directly to the Festival web-site)


BBC One's Who Do You Think You Are ? : Paul Merton 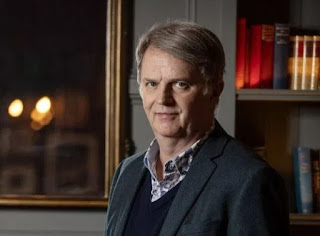 The image (by Stephen Perry (?)) seems more like
the tristesse of Chris Patten than a resemblance to Merton ?

As if, time after time, each thing that he was told about, first, his grandadwas really no more interesting than the price of sprouts* - with 'Oh. Wow.' as a common reaction...

Admittedly, more patent when seen with the hard-of-hearing sub-titles (complete with the lack of care that they exude), but there should be an example here :https://t.co/xSwKNRPFjk

Or here is the full programme (on @BBCiPlayer) :https://t.co/qNjSdmtQqV
— THE AGENT APSLEY #ScrapUniversalCredit#JC4PM2019 (@THEAGENTAPSLEY) August 28, 2019

One might think that Paul Merton* (on BBC One's Who Do You Think You Are ?) had forgotten that this was meant to matter :https://t.co/fX6l6WFV1R

Jasper Rees (for @Telegraph) is behind a pay-wall, but may well agree ? :https://t.co/GITIjkiY8v

Posted by The Agent Apsley at 17:17 No comments:

Email ThisBlogThis!Share to TwitterShare to FacebookShare to Pinterest
Labels: BBC One, factual, Paul Merton, Sheffield Documentary Festival, Who Do You Think You Are ? 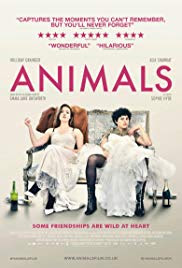 First, and foremost, this is a film-festival film*, which, with Australian / Irish film-industry funding, has somehow obtained distribution

It may not have been made as a television film, but it could not even 'fill' Screen 3 at The Arts Picturehouse - not that there was no audience, but that Animals felt small, trying to occupy a space, and use silence and its funky score, in a way that just had no impact, and seemed effort with no result. It would work much better on t.v., with its bubbles of out-of-focus street-lighting, glitz, and characters / their positions, which often seem insubstantial

The moments with the wildlife (were they any more than rushes ?) were, so much more so than Dylan Thomas' stuffed fox, would-be portentous - or with a sickening literalism to Who were the animals here ?

Good use of location (an establishing shot, and suitable noises of the sea and its birds, sufficed to make the interior of where Jim lived match that exterior)

We are to believe / credit that Laura 'is a writer', because she has a poster for Virginia Woolf's A Room of One's Own** to the left of the desk where she works (let alone, nearby, another image of Ginny)...

The film is well enough made and shot, but one takes those as given - although the real or seeming artlessness of an early Yorgos Lanthimos film, Kinetta (2005) may be an impediment to some (in a sense, it is meant to be one), it is part of the affect of the film, and heightens its worth : on the scale of Animals, those things about everything being in focus and lined up, etc., are absent, but that does not make Animals a better film, and Kinetta is arguably far finer despite and /or because of them.

On the Road (2012) scarcely did a worse job, with Sal Paradise, of convincing anyone that he was not only a writer, but also could even - just by soaking it up, and writing it down (i.e. typing onto the probably mythical continuous roll of paper) - self-referentially create what we were seeing :

Except that we know that Jack Kerouac was a published writer, whereas nothing that Laura does suggests that she writes / can write anything beyond note-like observations, and her decade-long pretensions, although the film may feel that we spent that long with them at times, are just irritating. Laura is Frances, in Frances Ha, but Frances (Greta Gerwig) has real emotional reasons why she cannot do what she actually can do, and Laura (Holliday Grainger) has over-indulgent people who listen to her talk about it instead.

* Very often, 'film-festival films', once so viewed, stay viewed in that way (and with suspicion), and so are not thought of as commercial. Many films of this quality or better do not even get a screening at a significant film festival - a film's being distributed is therefore not, in itself, a measure of its worth.

** The book that, first delivered in two lectures at Cambridge (at Girton and Newnham Colleges), puts a case for why a woman needs space, let alone one who would write, who has to have one in which to do it : A Room of One's Own could almost have been the tag-line for the film ?

Unless stated otherwise, all films reviewed were screened at Festival Central (Arts Picturehouse, Cambridge)
Posted by The Agent Apsley at 17:53 No comments:

Almodóvar's Pain and Glory (2019) : A first-blush response, after a preview screening
More views of - or before - Cambridge Film Festival 2019 (17 to 24 October)
(Click here to go directly to the Festival web-site) 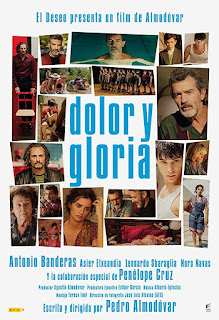 However, in Pain and Glory, Almodóvar outgrows both those references, and a sly wink at Cinema Paradiso (1988) (not to this film alone), to bed in and then engagingly transcend such usual pre-occupations of his as betrayal, gay love, happenstance, and the physical body.

Enemies of Promise** ~ Others are the saboteurs - or is it the enemy within ?

Indulged, without the ostensible - if not actual - charm of Fellini's Guido Anselmi, Salva(tor)*** (Antonio Banderas) has been given the medical history (which he relates / narrates himself), if not necessarily of a hypochondriac, then, it is soon suggested to us, of someone who has neglected self and others. Yet he does not, or will not, attribute fault for his ills except to those others : in some measure, although the picture is exaggerated for effect, we could or should all be able to see where guilt has similarly held us back (and may even have become expressed in body and / or mind).


Salva is thus writ large so that we cannot but see both his condition, and how Almodóvar fleshes out its origins for the character at the same time as for us - indeed, as Fellini does, with Guido in 8½ (though this is not 8½, nor even Nine). (Or, equally, in Allen's tender tribute to the film, in Stardust Memories (1980), with Sandy Bates (Allen himself)**** ?)

Though perhaps, but without his bitter-sweet poignancy, there is actually a closer resemblance to Jep Gambardella (Toni Servillo****) in Paolo Sorrentino's The Great Beauty (La grande bellezza / (Immense Beauty) (2013), and to what - and how - Jep (re-)discovers about himself... ?

Admittedly, what follows is on the basis of having skipped The Skin I Live in (La piel que habito) (2011), having avoided being adversely reminded of the camp excellence of Alan Cumming (Sebastian Flight), Forbes Masson (Steve McCracken), Siobhan Redmond (Shona Spurtle) and Patrick Ryecart in the t.v. series The High Life (1994) by I'm So Excited ! (2013), and just plain cleverly missing a theatrical release of Julieta (2016). However, this is still a more cutesy - dare one say commercial ? - film than Broken Embraces and therefore something of a shock... (And, as with Yorgos Lanthimos, maybe the earlier films have more imaginative power and depth ?)

* It seemed that the ink was, as it were, no sooner dried on Match Point (2005) than its themes were re-worked in the grief- and guilt-ridden Cassandra's Dream (2007) - the latter of which, though far better, few seem to know...

** The title of a book by Cyril Connolly, which reminisces and reflects on British public schools, amongst other things.

*** Maybe wrongly, but one reads an irony into those called 'Saviour' in films, e.g. in Rosi's Salvatore Giuliano (1962).

***** Another 'Anthony', and St Anthony (presumably of Alexandria, not Padua - unless Salva is what / who 'is lost'?) indeed has a cameo in Dolor y gloria.

Unless stated otherwise, all films reviewed were screened at Festival Central (Arts Picturehouse, Cambridge)
Posted by The Agent Apsley at 20:18 No comments: