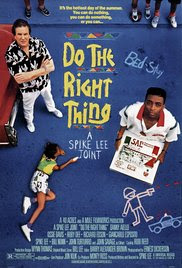 To-night, at @CamPicturehouse, a Special Screening gave us a chance to watch Spike Lee's Do the Right Thing (1989) - despite being born in 1957, and so 32 at the time of the film's release, Lee convinces us that he can play Mookie, a character meant to be a fair bit younger... pic.twitter.com/eocxorIlO6
— THE AGENT APSLEY #ScrapUniversalCredit (@THEAGENTAPSLEY) September 4, 2018 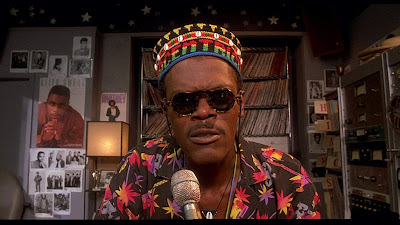 * Also, using devices such as a group of characters acting as a Chorus, or the ambiguous external, yet engaged, figure of Mister Señor Love Daddy (Samuel L. Jackson)

* All quite a bit Max Frisch, but maybe too portentously - even though the eruption of violence serves to shock
— THE AGENT APSLEY #ScrapUniversalCredit (@THEAGENTAPSLEY) September 4, 2018

* Of course, if he desires to resemble Greek drama [as Chi-Raq (2015) consciously re-works Aristophanes : https://t.co/p3iJsjM6n3], he'll be satisfied with this ensemble cast - even when it feels too contrivedly making points about intolerance or a blindness to one's own faults. pic.twitter.com/Dopckke3vE

Unless stated otherwise, all films reviewed were screened at Festival Central (Arts Picturehouse, Cambridge)
Posted by The Agent Apsley at 17:27 No comments: