Some immediate responses to The Front (1976), in which Woody Allen plays Howard Prince, who fronts for writers who have been black-listed under ‘McCarthyism’ 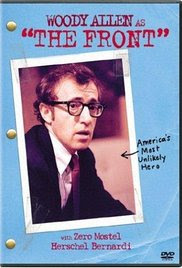 With the opening archival montage, and as we hear Sinatra (with ‘Young at Heart’ [Carolyn Leigh / Johnny Richards]), the tone of irony and of dramatic irony¹ is set : deliberately (but only if we stop to ask ourselves what the images that we are seeing depict), a contrast of ostentation, as set against disadvantage…


Almost at the centre of the film (which goes on to shed insights into the origins of the part of Danny Rose in Broadway Danny Rose (1984)), there is a scene between ‘Hecky’ Brown² (Zero Mostel) and Hennessey (Remak Ramsay), the post of the latter of whom² (whatever is his exact office, which seems to answer callers as 'Freedom Information Service' [suitably Orwellian ?]) effectively influences studios in whom they should consider ‘Unamerican’, and why… :


Brown : You want me to spy on Howard Prince ?

Hennessey : We are in a war, Mr Brown, against a ruthless and tricky enemy, who will stop at nothing to destroy our way of life. To be a spy, on the side of freedom, is an honour !

Hennessey : I don’t do the hiring, Mr Brown – I only advise about Americanism. But, in my opinion, and as the sign of a true patriot, it would certainly help…

In The Front (1976), a scene's reminiscent of The Fall and Rise of Reginald Perrin (1976), as Prince (Allen) incites resisting the committee
— THE AGENT APSLEY (@THEAGENTAPSLEY) January 1, 2017

Likewise, Reggie Perrin (Leonard Rossiter) tells CJ (John Barron) when it suits him to see CJ : he perversely gets some other appointment... https://t.co/uCBiUtf8JD
— THE AGENT APSLEY (@THEAGENTAPSLEY) January 1, 2017

Cinema both shows us dogmas that come to power, and that they can cease to rule - this film takes us to the wire :https://t.co/m5A07lELgL https://t.co/haf0GOQ34a
— THE AGENT APSLEY (@THEAGENTAPSLEY) January 1, 2017

¹ Sometimes, we are allowed to congratulate ourselves for seeing in advance what is coming, which helpfully hinders our confidence in our judgement at other times, when we are not granted that privilege. (Irrespective of how meritorious the subject and message of - not unrelatedly - Snowden (2016) may be, the fact that it is lacking in irony, or in putting what we know to good effect with dramatic irony, is a large part of what is so dismally disappointing about the film.)

² IMDb (@IMDb) is, as usual, fairly hopeless on character-names : in the dialogue, we hear Brown’s real name (Herschel Brownstien³, not just this nick-name), and Hennessey has his full name on his desk (Francis Hennessey, with a middle initial of X.⁴), but the web-page for the film, however its information may be gathered (here, just from the closing credits ?), is ignorant of this knowledge, and not to be relied on for it.

³ Except that American pronunciation is notorious for pronouncing a Germanic 'stein' as 'steen'...

⁴ Thereby invoking an Irish-American background and, via the name Francis Xavier (a co-founder of the Society of Jesus), The Spanish Inquisition.

Unless stated otherwise, all films reviewed were screened at Festival Central (Arts Picturehouse, Cambridge)
Posted by The Agent Apsley at 17:50 No comments:

I do in friendship counsel you / To leave this place¹ : A response to Long Forgotten Fields (2015)


This is a Festival response to Long Forgotten Fields (2015) (which was directed by Jon Stanford, and premiered at Raindance Film Festival 2016) 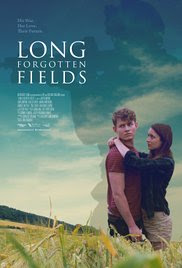 Featuring what is insightful understanding in, and in showing, whatever is happening to² Sam (Tom Campion), all of it is at the centre of Long Forgotten Fields (2015), but without its being or seeming to be ‘about that', since there are many other connected themes that question the meaning of notions of strength, trust, duty, and loyalty, and how we describe them both to ourselves and to others when we invoked them.

We are put us straight into the woodland, and then, through his sister, into Sam’s time at home on leave : an embeddedness, in the setting in Shropshire, acts as a tension with what is and becomes reality for Sam, and into which Lily [Rebecca Birch] finds herself entering, and thus becomes – at various levels – complicit...

Very positively meant, perhaps a little as if Shakespeare’s Forest of Arden (in As You Like It) actually turns out a far worse place than being in the life of a provincial French court, and subject to its ways¹ ? :


And this our life exempt from public haunt
Finds tongues in trees, books in the running brooks,
Sermons in stones and good in every thing.

² Diagnostic labels, such as post-traumatic stress disorder (PTSD) or schizophrenia, rarely add to the nature of such experience, or the acceptance - or other accommodation - of those who have or see it, because they are reductionist in nature.

Unless stated otherwise, all films reviewed were screened at Festival Central (Arts Picturehouse, Cambridge)
Posted by The Agent Apsley at 22:22 No comments:

A Faustian underpinning to An Affair to Remember (work in progress)


It is said that An Affair to Remember (1957) closely followed its predecessor Love Affair (1939) : be that as it may, the former was screened at Cary Grant Comes Home for the Weekend Festival (@carycomeshome), in July 2016, so it is the treatment there that is considered¹


It is exactly a quantitative versus a qualitative measure that distinguishes Don Juan / Giovanni [DJ/G] from Faust : DJ/G needs, but can never find, satiety, and so continues desiring and seducing (if the latter is not wholly swallowed up by the former ?), whereas it is more that Faust's palate has become jaded than that he needs [Mephistopheles to allow him] to devour. It appears that, in Faust's sub-lunary perception, everything is mundane, and has lost (or he himself has deprived it of ?) its taste. However, that means that Faust, unlike DJ/G, is at least still capable of feeling, and of making quantitative distinctions - despite his head-bound living, and thereby not valuing putting his talents to good use.

In an Affair to Remember, Goethe's character of Faust is, vis-à-vis Gretchen and he, telescoped into a number of largely discrete sections, which necessarily hint at Nicolò Ferrante (Cary Grant) as a redeemable figure, such as Goethe has him be (versus, say, Chrisopher Marlowe), but in no way trying 'to flesh out' the whole Faustian background (or even any Mephistophelean pact - Nicki F. is anyone who could be astray in life, not a specific as Faust is) :

1. Time at sea (including, at its core (cuore), the time inland, chez Janou)

2. The sixth-month time of probation, and what causes it not to terminate

3. Commencing with Nicki renouncing waiting at the meeting-place, and the resultant voluntary and involuntary (attitudes that lead to) prolongation of the self-imposed separation

4. Beyond death, and by virtue of another call chez Janou² (with whom Terry also tried to correspond²), and via a chance and awkward encounter (suggestive of each, to the other, a falling-away of their shared promises ?), a bringing-together in and through Janou's gift to Terry, as conveyed by the angry, hurt Nicki

¹ As it went, it was recalled initially, and faintly, as if it were not itself, but another, very similar film... until one recalled actually having watched this film before (the wonder of cinema ? !).

² A reaching-out, beyond themselves, to a kindred spirit.

Unless stated otherwise, all films reviewed were screened at Festival Central (Arts Picturehouse, Cambridge)
Posted by The Agent Apsley at 18:58 No comments: