In four Tweets, a taste of Mike Leigh's Peterloo (2018)
More views of - or before - Cambridge Film Festival 2018 (25 October to 1 November)
(Click here to go directly to the Festival web-site) 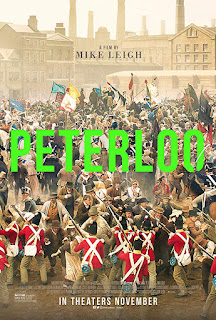 It's both as when Spall is stylized to prick pomposity (e.g. portraying Ruskin's aesthetics as fatuous) and reclaim his works as those of humility, not nobility, and @Aiannucci's melding the terror and humour in the power-struggle (e.g. Molotov (Palin) and Beria (Russell Beale)).
— THE AGENT APSLEY #ScrapUniversalCredit (@THEAGENTAPSLEY) December 17, 2018

Therefore, for example, it is apt for us to be reminded of any of these events or references :

* The Battle of Culloden

Unless stated otherwise, all films reviewed were screened at Festival Central (Arts Picturehouse, Cambridge)
Posted by The Agent Apsley at 08:19 No comments: