Joy Lisney's 'Thread of the Infinite'


An account of the world-premiere performance of Joy Lisney’s ‘Thread of the Infinite’, by Cambridge University Chamber Orchestra and directed by Thomas Gould, at West Road Concert Hall, Cambridge, on Saturday 13 May at 7.30 p.m. 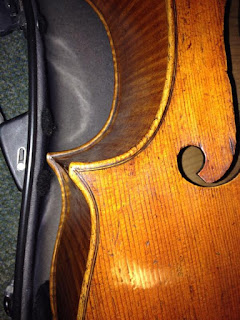 Thanks, as ever, for your musicality, @ThomasGouldVLN, in directing @CUCO_CUMS in the world premiere of @JoyLisney's Thread of the Infinite.
— THE AGENT APSLEY (@THEAGENTAPSLEY) May 13, 2017 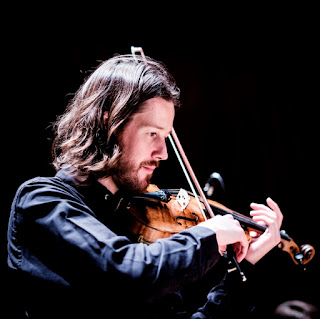 Thomas Gould, associate leader of Britten Sinfonia (at #UCFF, both much blogged about)

An intriguingly plaintive, repeated motif on solo oboe¹ is the genesis of this attractive and engaging short work (running, Joy Lisney said in advance last night, to around ten minutes²) : in attempting to write review-notes for new music, one knows that a piece is attractive and engaging, because one then wishes that one had a better memory for musical detail, and could instead dispense with almost all notes and listen whole-heartedly, but just write something straight off afterwards (which must be a blessing to those who can do it).


And God made him die during the course of a hundred years and then He revived him and said :

‘How long have you been here ?’

The Koran, II 261
[Quoted, by Jorge Luis Borges, in the guise of a motto to head his story The Secret Miracle' ('El milagro secreto’ : the link is to a PDF version in English). All of Borges' stories are short stories, some very much so]

With timpani, and employing tremolo, a small group of strings joins in, before we revert to an iteration of this opening from principal oboe, then strings. From here, and in tonal uncertainty, further material begins to emerge, now with pairs of clarinets, bassoons, flutes and both oboists, to which are added two horns and two trumpets (con sordini). At this point, the full realm of the percussionist is evoked, with snare-drum plus marimba (sans vibrating mechanism, so as more to resemble a xylophone³ ?), and then within the musically and emotionally resonant lower range of the marimba (now, with resonator engaged).

As the development section continues, accented pulses establish themselves between and within the full orchestra, but the contrasts between the sizes of forces being brought into being continue in tandem, and so we drop down to a few woodwind instruments, just before - with a different tone to it - the oboe motif recurs, and Joy uses the effect of flutter-notes from the flautists. Again, the sound of the ensemble swells into a tutti, with a very vigorous texture to it.

Sounding as if his role had moved into that of playing an obbligato instrument⁴, Thomas Gould – who had, when not needing them to play, been directing with his hand (or bow) – passed the directorship to a fellow violinist for the moment. Joy brought viola and marimba (qua xylophone ?) into prominence, with chimes (or struck crotales ?) straight afterwards. Even if this violinistic feature were no conscious nod to Tippett (and to his own to composers of other climes), we could enjoy the gracious, sweet tones of Gould, as this section reached another crescendo.


With, if cinematic images are evoked for a brief while, ones that are of a rainy and darkish scene, we entered what sounded like a moody coda, in which Joy sets woodwind (principally clarinet and flute) against soft pizzicato. Next, a horn is added, and both trumpets, in the sort of accretive layering that we have encountered earlier. Yet the work closed quietly - with Gould on violin, and with principal oboe.

A very happy composer tonight after hearing @ThomasGouldVLN lead @CUCO_CUMS in my piece 'Thread of the Infinite'. Thank you to all involved!
— Joy Lisney (@JoyLisney) May 13, 2017 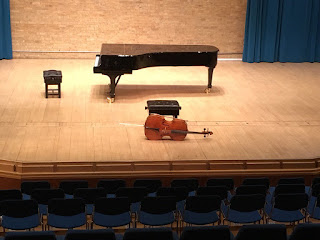 To the musicianship in hearing Joy play (at Kings Place (@KingsPlace), as a duo with her pianist father, James Lisney - as above on 28 February 2017, on a leg of their Cello Song Tour, at West Road (@West RoadCH)), and also direct in her own right [from the cello] (with Seraphin Chamber Orchestra (@SeraphinCO) - please see below), could now be added the musicality of an adept composer, writing a work that transcends its physical length and scale, and making, once more, that connection with cinema : where a strong short film can say far more, in such a timescale, than in the scope of some very average feature-length ones. 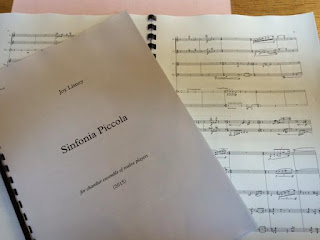 At the time of posting, but now reviewed here, what was another forthcoming⁵ date for your diary... :

¹ It resembled and reminded of something in nature, or in music – perhaps it was not birdsong notation à la Messiaen, but did it, say, remind of the theme for one of the characters in Peter and The Wolf (Prokofiev’s Opus 67) ? (It may actually have been, as this review suggests, on a lower-sounding instrument, the cor anglais...)

On checking, there proves to be a tenuous reason to mention Franz Kafka (whose surname is Czech for 'crow'), because the title of the work derives from Victor Hugo in Les Misérables, which is seemingly (because finding a verifiable citation for quotations can be arduous) :

² As with the best of film, where screen-time – if one but desists from looking at how many minutes have elapsed / are to run – shows how illusory our notion can be of duration, and of over what period what we have seen happen took place.

³ During the performance, one could not quite see the instruments being played, at all times, because the percussion was behind the trumpeters and the rostrum on which, behind a group of string-players, they were standing.

At #UCFF, sometimes (maybe how it was recorded and / or when not using the resonating mechanism) we could swear that there's a marimba, too https://t.co/So6unFWDLZ
— THE AGENT APSLEY (@THEAGENTAPSLEY) May 15, 2017

⁴ Though Joy, speaking momentarily afterwards, said that this had not been a nod to Sir Michael Tippett, and his Fantasia Concertante on a Theme of Corelli (which was the other item in the first half), because she did not know the programme at the time.

⁵ If, without thinking about it, you now say 'upcoming', when you used to say 'forthcoming', you might wonder whether that is such a good thing... ?

Unless stated otherwise, all films reviewed were screened at Festival Central (Arts Picturehouse, Cambridge)
Posted by The Agent Apsley at 16:21