In stilo moderno with The Castello Consort (uncorrected proof)


This is a review of a lunch-time concert given by The Castello Consort, during Beverley Early Music Festival* and under the title Laudate !, at Toll Gavel United Church, Beverley, on Saturday 27 May 2017 at 1.00 p.m. (uncorrected proof) 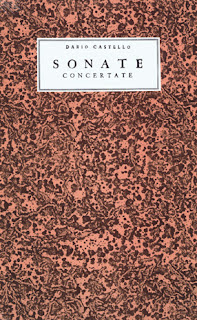 We were to hear several pieces by Adam Jarzębski, and the first, his (1) Küstrinella à 3 (soprano e due bastarda) helped serve to make us familiar with the sound-world of The Castello Consort [the link is to recordings, on their web-site], an ensemble that comprises (when they do not incorporate other players / singers) :


Both an introduction in person by Matthijs van der Moolen at this point**, and his very full programme-notes, told us here about the types and styles of pieces, as well as some of the instruments, such as the violoncino (referred to in the titles of various pieces as a bastarda, as not quite a viol, but not quite a cello) : (2) played by Anne-Linde Visser, we could hear how, with a very similar shape to a (baroque) cello, it had the same resonance, and was also supported between the calves, but had a different tone-colour. In this Sonata, the violin also had the intonation that we could hear in the playing of the sackbut.

With sympathetic organ continuo from Henriëtte Wirth, the opening of (3) the second piece by Cima played with sackbut alone, at the start, and then the other instruments came in, and out – sounding, then falling silent. The tone of the piece was not exactly serious as such (i.e. certainly not tragic), but it was a quietly wistful one, and – particularly as between the instrumentalists – it was clear that the consort is respectful and responsive.

As the programme-notes told us, (4) this item by Taeggio was a diminution piece for violoncino (which took Palestrina as its basis, with his five-part motet performed on the organ) : in some parts (more than others), there was an improvised quality to it, and – hearing from him afterwards – van der Moolen confirmed that much of what he had been playing, on the sackbut, is not ‘written out’. (However, the score gives an outline of the structure – as, one suggested, a ‘chart’ might in jazz.) At the conclusion, there was the impression of the virtuosic, or of something ‘in fantastic style’ (stilo fantastico), since, after all, this is music from the Baroque era.


(5) The first work by Castello initially conveyed rusticity (and this impression was to re-emerge later). Afterwards, van der Moolen said that ‘stilo moderno’ is not what Claudio Monteverdi was referring to (for the voice) by segunda practica, and so it was agreed that, at the very least, such a title made the piece sound new, and so could be / have been ‘a selling-point’.

Although it was an undivided Sonata (not in the later sense of the word), it fell into distinct sections, and in varying configurations : thus, we moved from solo violin, to adding organ continuo, to the violoncino adding in and the violin dropping out. In a section that employed the trio of instruments, we heard the first of several cæsuræ, which introduced a change of tempo. Although the Sonata does not literally end quietly, then it does so thoughtfully.


Before (6) a second composition by Jarzębski, Matthijs van der Moolen apologized for ‘the extra tuning’, which he explained was necessitated by the high temperature on the day. Between Elise van der Wel on violin and him, it was not so much call and response, or hearing echoes, but more like interplay (again, a little as with jazz, and, say, a trumpeter and a saxophonist at the front of a quintet, and swapping phrases ?). This piece was another with a thoughtful close.

Monteverdi’s (7) Laudate dominum was performed by sackbut, violoncino and organ, but with the first as the principal – and highly celebratory – instrument, and van der Moolen standing next to Anne-Linde Visser, better, one guesses, to gauge the sonority of the ensemble. The organ underpins the work, and the violincino gives variety to the rhythmicity. In Visser’s playing, we perceived the effect of a Chaconne, and also, over sections that had longer, held notes, exploratory and vivid passages on the sackbut, and more cæsuræ.

(8) The final composition by Jarzębski that we heard displayed the inter-dependency of the voices (a trio of violino, violoncino, and organ), and held notes and diminutions on violin. Later, there were mimetic responses between the stringed instruments, or apportioned alternations of playing, before they sounded together, polyphonically.


(9) This was the only contemporary composition (by van der Moolen, also modelling Gabrieli), and, although he was necessarily to the fore, he also prominently employed Visser’s very low register on the violoncino. As an experiment, if he had not made us aware, might we have been unaware – from the idiomatic writing – when the work dated to (as it is unclear from the programme what material by Gabrieli he is using as a basis, whether the work dated to the late-sixteenth or early-seventeenth century, or was the work of a later, older composer) ? (Maybe just that, on violin and violoncino, the notes were held for so long, and because the sackbut sounded more out of measure, perhaps even jazzy.)


We learnt that, contrary to the programme, this was not (10) a piece by [Giovanni Battista] Riccio (1570-??), but (as with the next one) by Biagio Marini, and also that it is really an organ piece, accompanied by sackbut and violin. However, as was chatted over with Henriëtte Wirth later*** (amongst other things, from how to sound Gesualdo’s vocal dissonances to the mechanics of the organ), one listens differently when given such information. So it meant that one was aware that the role of sackbut and violin was providing adornments to Wirth’s agile principal performance (but would one otherwise have appreciated the fact ?).

As has now been established (from the Internet), the programme did not make clear [perhaps in more than this case ?] that this item was (11) a movement taken from Marini’s Sonata terza (1626), which perhaps made it more difficult to know – aurally – what one was listening to (please see the remarks above). Likewise, as van der Moolen observed beforehand, he had (unnoticed, and preceding the last piece) opened the front-doors of the chamber-organ (which he was now closing***). As one saw Wirth taking a cue from Elise van der Wel (violin) at the start, this was the first music that seemed familiar (was it from one of [ ] La Serenissima’s programmes – or one by [ ] The Academy of Ancient Music ?). In any case, van der Wel’s articulation was perfect, with especial facility in the writing that was less legato, and well adapted (more so than we) to varying modes of playing and their affects.

(12) The second item by Castello was quite different (and without the violincino), and seemed to offer diverse interpretative choices. Yet, as well as being different, it had very differing sections within the piece (as with that by Claudio Monteverdi), and put one a little bit in mind of [Heinrich Ignaz Franz von] Biber. With (13) the work by Mariani (not, obviously, to be confused with Marini), we were back to our first themes of resemblance to human voices and, where they were previously being heard, the music of the church, about the latter of which van der Moolen was explicit, by pointing out that it was said to be ‘per il deo’. Here, there were also changes of tempo, but they were less significant than those of dynamic and tone.


This was an impressive UK debut by a bright and receptive quartet of players, bringing us a curated choice of music that helped us understand the repertoire that is at the core of their interests, and how Sonate and Concerti developed as instrumental settings within the church, and then outside.

** Which informed us that Lauda Jerusalem à 3 was being omitted from the programme, as it had been found to be too long for it.

*** In the Minster, during the interval of The Tallis Scholars’ concert that night [of which a Tweet-based account is in progress]. When talking, one thing that arose – as a question from Henriëtte about the nature of what one hears – was the audibility / carry (in the space) of the organ in relation to whether the ensemble ought to have had the doors all the time (as so some there had apparently seemed to believe, when heard from afterwards).

(That said, and obviously not unkindly meant, but loss of higher-frequency hearing tends to be a feature of ageing, and the upper and sometimes delicate sounds of the upper pipes would therefore benefit from the chance to be better heard : it is typical, amongst the members of audiences at early-music events (and, here, evident from Friday night to Monday afternoon), that most are a decade or so older than even many performers (yet alone a generation or more than these newcomers ?).

Unless stated otherwise, all films reviewed were screened at Festival Central (Arts Picturehouse, Cambridge)
Posted by The Agent Apsley at 17:30