This is a brief review of Gabby Young and her new band at Rich Mix, Shoreditch
More views of - or before - Cambridge Film Festival 2017 (19 to 26 October)
(Click here to go directly to the Festival web-site)


This is a brief review of Gabby Young and her new band at Rich Mix, Shoreditch, on Tuesday 9 May 2017
The attendant costs of a weekday day-trip to London (even with a Network Card) can quickly mount, but, with the #Hockney show at Tate Britain (@Tate) ending within the month (Monday 29 May), and weekend opportunities to get there (and Tate Modern) thus diminishing, combining seeing sixty years of one British artist’s work with attending an important night in the career of another seemed like the right thing to do. So it was !

Gabby Young had been heard last time at Bristol Harbour Festival (with the former line-up of Gabby Young and Other Animals), and, before that, it had been free tickets at Cheltenham Jazz Festival [won in a competition, plus, agreeably, some complementary bottles of cider from a Festival sponsor (no clue in the video that is linked to)] – so it was about time to stump up and support Gabby’s London come-back by paying for entry to Rich Mix (@RichMixLondon), on Bethnal Green Road (in Shoreditch). 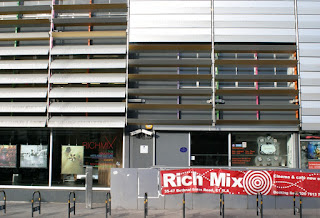 First, however, a few Tweets about the support band of LAUCAN (of London / Lewes)…

And a very welcome return to the stage for the fab @gabbyyoung with a new sound and look very well received by the @RichMixLondon crowd. pic.twitter.com/SVqqF2razM
— Substandard Nerd (@substandardnerd) May 9, 2017

This jazz-influenced @laucanmusic warm-up set for @gabbyyoung shows what a trio can do with voice / guitar, cello, and drums / electronica !
— THE AGENT APSLEY (@THEAGENTAPSLEY) May 10, 2017

.@samleesong At @RichMixLondon this week, @gabbyyoung told us that not only had @samleesong sung at her wedding, but she just done this nightingale duet. pic.twitter.com/vDxPPGgerh
— THE AGENT APSLEY (@THEAGENTAPSLEY) May 13, 2017


Other than lead vocals from Gabby (as well as, occasionally, guitar – and percussion), and some backing vocals from the rest of the band, we principally heard electric bass (the player doubled on guitar), keyboards (and related electronica), drums, and rhythm and electric guitars, but also melodica and accordion. Some fairly good-natured jokes were exchanged about readiness (or otherwise) for the next number in a couple of places, but this was very good and fluent musicianship – and, where the firmer beat and louder tones kicked in, Gabby Young and her band (@gabbyyoung) tore the place up, to great excitement.

16. All you need is love ~ Lennon and McCartney arr. Stephen Revere
17. We’re all in this together


A pair of encores began with (16) ‘All you need is love’ – sounding, as Gabby rightly said, as we had never quite heard it before – in Stephen’s calypso reworking of the melody. When, after a stretched-out intro (and even more unlike The Beatles’ original), the band let the throttle go, it was even more lusciously Caribbean, and full, indeed, of love – including, of course, ours for Gabby and her crew :

As a choice for the final closing number of the night, it was excellently twinned with one of her classics, from the days of Gabby Young and Other Animals. Since, earlier on (and without any persuasion), Gabby had got us singing refrains (or even repeated syllables, which marked out a melody-line), we were practised and ready to join her and the band with the signature song (17) 'We’re all in this together'*.

Regardless of an enforced break in her singing career, @gabbyyoung showed her vibrancy and versatility and her sassy new band this evening !
— THE AGENT APSLEY (@THEAGENTAPSLEY) May 10, 2017

So effortlessly, the gig had built to this moment of celebration, and so we felt extremely pleased that we had all made it out on a Tuesday night to be there, at Rich Mix (in conjunction with The Nest Collective), both with Laucan [link to the band's page on Arsebook], and with Gabby and a band that had shown itself more than capable of great liveliness : as she declared, We’re back !, so, even if [you think that] you know her from previous performances, do go and see this rocked-up incarnation, and share the love !

* A sentiment that she emphatically said that [ed. some self-important person called] Theresa May was not claiming (who is known to some, if they follow @THEAGENTAPSLEY, as #SeamyHater) !

Unless stated otherwise, all films reviewed were screened at Festival Central (Arts Picturehouse, Cambridge)
Posted by The Agent Apsley at 17:13