This programme of seven¹ short films at The Arts Picturehouse, Cambridge, was from London Short Film Festival (@LSFF) and presented in conjunction with The Guardian² (@guardian / @guardianfilm) 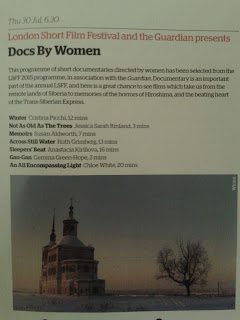 Whether it mattered that all of the films had been directed by women, taking these four³ in turn... :

One of two films (in the whole programme) to show the vastness and coldness of the Russian lands, this one had a much better soundtrack, employing sound-design that uses low-frequency electronica, broadcast speech, and the sound of the wind, and which complements, and so strengthens, the effect of the visual element :

Occasional narration tells us of the deprivation of living within The Arctic Circle (when ‘the polar day’ is dominated by darkness), and of levels of cold that make one not wish to venture out and check the gauges at the weather-station, but the approach of Zima (Winter) is principally visual : slow pans, scenes of snowy streets reflected or from above, and full, static shots of ships, etc. Or ice-fishing on Baikal Lake, with sound captured of being underwater to accompany the threatening tales of what happens to the unwary who venture there…

This is not a film that imagines that an adult audience needs its story laid out from the start : it dares to have us knocking around in an underground space at the beginning (where elongated, protective bags are in evidence, but are we clear that they do not contain hunting equipment ?), and running through shots, by the water (and using natural light ?), of night-fishing, before a scene where John is talking to his mother in her kitchen.

His disability, or its nature, escaped us, but now – and with scenes of practising casting in daylight – we realize that what can be reached with a rod symbolically is a sort of measure of it. Across Still Water, in its pace and editing, has a considerable sense of still, and space, in which to contemplate what we now see. And the dark, and the moonshine, of the final scenes by the water serve as metaphor, as John comes to the point of saying to his friend Gonna have to swallow and do it in the end.

A film that includes incredibly fast sequences of montage to imply the vitality of and variety within a deceased grandmother’s life, interlaced with personal narration about the film-maker’s and her times together. Full of repose, when the fast-flicker takes its times to subside, and a melding of word and image that defies one not to be impressed by it.

We guess at what that light was, for our Korean-born narrator in Japan, but we do not guess that he and others in his position will have been discriminated against for having witnessed it (as if he had not already faced discrimination because of his race) : this comes out of his involved, but calm, recollection, contained in a film that gradually takes us beyond a house, and a man emerging from it, to the life that led up to, and reasons to remember, 6 August at 8.15 a.m. (An anniversary which, he tells us, was still being marked twenty years ago, and whose being forgotten encourages him to relate what he had never planned to tell.)

With excellent music from Thomas Carrell, which ebbs and flows as with waves, the film is careful in pace, and in mixing imagery from then and now. At the centre of the memories, the emotional, but measured, telling of his mother’s warm tears on his neck : of the pus from where he had been burnt, and the infection, and the maggots, which cause her to tend him, but to wish him Hurry up and die for fear – wrongly so – of what his later appearance would be.

² Whose story-led films of up to fifteen minutes we were encouraged to find at theguardian.com, and which, we were told, are intended to build up to a film per week.


³ The full programme was :

Unless stated otherwise, all films reviewed were screened at Festival Central (Arts Picturehouse, Cambridge)
Posted by The Agent Apsley at 14:37