What is seen – or maybe not quite seen – in the half-light ? 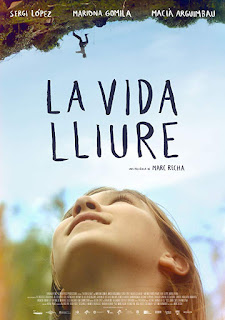 The #CamFF synopsis, duration and other details for the film can be found here,
and it screens on Monday 29 October [in Screen 2 at Festival Central] at 7.15 p.m.

We are thoughtfully introduced to a beautiful setting on Menorca (which, however, we do not see that often in full sunshine - please see the comments below) by footage of what appears to be the sinking of a vessel by a U-boat, and so we are partly located in time : as with everything in this film, right through to when, starting with a jazzy title-sequence, the end-credits roll² (and which one therefore cannot afford to miss), there is a significance to it all, but probably only the avid readers of certain types of fiction would be alive to them all.

For, when reading Joyce in Ulysses (or even Finnegans Wake), it is not as if we need to be able to know all the different languages that he uses, or follow the references that he makes to Dublin (current as at 16 June 1904), to take in the novel's sweep³.

Here, Marc Recha's La vida lliure (2017) is a similar, but direct, immersion of the senses, which just asks us to see and hear as much as possible, and absorb it : a gorgeous sound-scape complements cinematography that, at least, apparently feasts itself on the effects that can be achieved by using available light (in what seems to have been a shoot of only 15 days) – and they will blossom wonderfully in a darkened auditorium where a film like this belongs, projected on a cinema-screen and evoking aspect of the penumbral, crepuscular and nocturnal :

If we can think of how Marc (Michel Quer) looked at Venice in La redempció dels peixos (The Redemption of the Fish) (2013), and what director Jordi Torrent showed us through his visitor’s eyes [here is a link to the trailer (on the industry film-sharing platform Vimeo)], or of Agustí Villaronga and his co-writers, in setting Incerta glòria (Uncertain Glory) (2017) in Aragón in 1937, we will have suitable film-references from previous seasons of Camera Catalonia in mind. 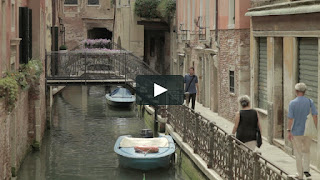 Four stills : from La redempció dels peixos (above), and Incerta glòria (below)


What we essentially have here is a boy (Biel) (who noticeably gets an interest in his name above that in that of Tina, his older sister), and both of whom are now with their uncle on Menorca (Minorca), because their mother could not take them with her to Algeria. (We do not know where they came from, but might guess that it is not one of the other Balearic Islands, but the mainland territory of Catalunya [Catalonia], far from here ? [Incidentally, the Catalan director Villaronga was born in Palma, on Mallorca (Majorca).]) 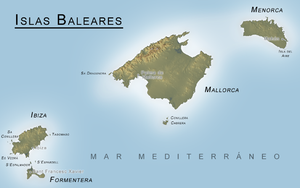 
In a residence by the harbour, a man calling himself Rom, from whom – without much force or effect – their uncle tells them to stay away. Yet, other than their uncle lovingly spending time with them when he rests, and their doing jobs around the farm that he tenants, there is little to occupy them. 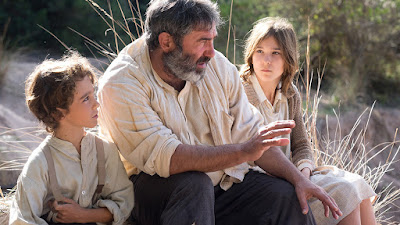 Time on their hands does not exactly lead to mischief, but we will find – amongst other things, if we are observant – that Rom fixes up a swing that their uncle did not find time to do (and which he had forbad Tina attempting, when she suggested it). For, part of the purpose and intent of the film is to acclimatize us to the sounds and rhythms of this simple place and the way of living there, and to get used to what stays the same (or to what changes) - as if, ourselves, we become Tina and Biel... ? :


Super film - carefully and quietly shows us its location and has it subtly change before our eyes !
— THE AGENT APSLEY #ScrapUniversalCredit (@THEAGENTAPSLEY) September 28, 2018

Although Núria Prims is credited for a very minor part in the film, Ramon Lamarca (who programmes Camera Catalonia at #CamFF) stressed that she also carried out the important role of coaching Biel (Macià Arguimbau) and Tina (Mariona Gomila). (Prims strikingly played La Carlana last year in Incerta glòria, and one suspects that she may have done the same office for, as well as being the mother of, her murdered husband’s supposedly illegitimate children⁴ in the film.) 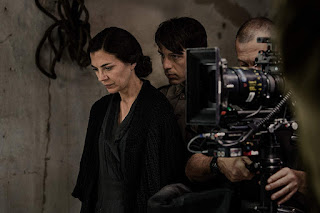 Núria Prims (as La Carlana) on set in Incerta glòria


As in Guillermo del Toro’s superb Pan’s Labyrinth (El laberinto del fauno) (2006), La vida lliure’s success depends on their performances, and therefore on our being engaged with whether - and, if so, the extent to which - they should trust Rom, of whom their uncle seems to disapprove strongly (and whom, with mistrust, he even confronts). 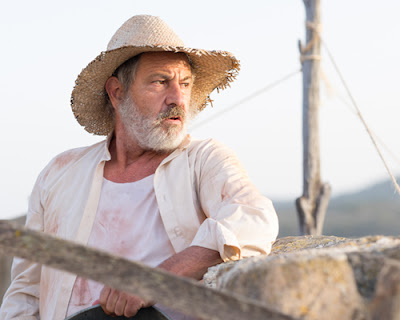 We may recognize Miquel Gelabert from El cafè de la marina (which these pages prefer to translate as The Harbour Café¹) (2014) - Libori, the inn-keeper father to Caterina (Marina Salas). Likewise, from last year in Camera Catalonia, Sergi López as Rom - from when he played a cynically unwelcoming uncle Enric to Gabriel (Àlex Monner) in La propera pell (The Next Skin) (2016). 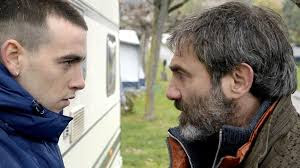 Those are simply observations, in case anyone is wondering why the face of Rom or the uncle might be familiar, but they are not given to suggest that, unlike Sílvia Munt [adopting Josep María de Sagarra, adopting Pagnol] in The Harbour Café, La vida lliure is likewise observational cinema per se, or essentially driven by the characters and their more-or-less known (or guessed-at) motivations.

In a sense, though, the film will come to us, if we come to it and treat it on its own terms, and, as with Pan’s Labyrinth (El laberinto del fauno), we should bear in mind how it opened, what we have noted in between in that light, and how it closes :

Until which point, the gift of the use of light in Hélène Louvart's cinematography (please see the stills above), and in the beauty of the sound-design [on the film's web-page on IMDb, three individuals and a mixing studio are credited for the Foley], has similarly been a lesson in creating atmosphere, which furthers our mental uncertainty about a town or port that we have not seen, or about the influenza, which we similarly cannot see, but of whose results we hear.


The images are exact - it's our understanding that lacks precision

They are the ‘big things’ of life that penetrate - as in Michael Frayn’s powerful war-time novel Spies ? - into the consciousness of Tina and Biel, but from which they are expected to remain at a distance : as much as from why their mother had to travel without them (even though she is able to write to them) and leave them in this place⁵ ? 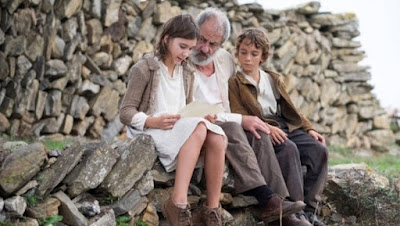 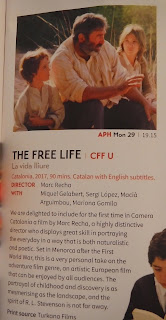 The #CamFF synopsis, duration and other details for the film can be found here,
and it screens on Monday 29 October [in Screen 2 at Festival Central] at 7.15 p.m.

¹ Without being a speaker of Catalan, one always hesitates about how / whether one should translate the definite article. (Thus, #UCFF has argued that Immense Beauty is nearer to what La grande bellezza (2013) conveys than the word-for-word English title.)

In some languages, the article must be there with a noun, i.e. one cannot just say Dolce vita - it has to be La dolce vita. Here, vita and vida are clear cognates, and so a less literal title in English might be A Life of Freedom ?

² At BAFTA (@BAFTA), they decently require that members and those whom they invite as their guests stay in their seats until the last line of the closing credits and the house-lights have gone up. (One forgets, from a solitary visit in 2015, but the curtain may go across as well.)

³ That date in June was that of his first date with Norah Barnacle, the woman whom he married. For such and much, much else, we have illustrated and / or foot-noted editions of Joyce (as for The Bible), such as Ulysses Annotated ! :

As to 'sweep', Joyce opens the Wake with riverrun, past Eve and Adam's, from swerve of shore to bend of bay, brings us by a commodius vicus of recirculation back to Howth Castle and Environs


⁴ Much hung on La Carlana's assertion of their illegitimacy, and, in this (and elsewhere), she may have deceived the local Republicans – who would have killed them, and her, too. Whereas they allow her to become stronger, almost unchallenged, until the battle for the soul and heart of Catalunya (Catalonia), against the will and weapons of fascism, erupts at the end of the film - with her sons and she retiring together under the covers : the significance of how Incerta glòria finishes, as if she has fomented this display of war-like action, will hardly have been lost on a Catalan audience. 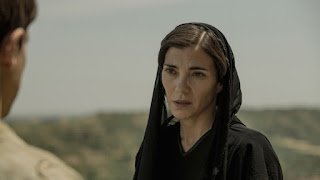 
⁵ As to what writer / director Marc Recha has done with what is in and amongst the credits, presenting the film’s title is deliberately ‘held back’ until just beforehand. As, perhaps, with Debussy’s titles to the works in his two Books of Préludes : only shown to us when relevant ?

Thus, the foot of the close of 'La cathédrale engloutie' (tenth in the first Book of Préludes) (taken from http://myricaeblog.wordpress.com/second-year/march-challenge/la-cathedrale-engloutie)

Unless stated otherwise, all films reviewed were screened at Festival Central (Arts Picturehouse, Cambridge)
Posted by The Agent Apsley at 18:44 No comments: