This is a Festival review¹ of Hitchcock / Truffaut (2015)
Two film directors, both of whom later turned out to have been near the end of their careers (and lives), agreed to meet for week-long interviews, the younger man [François Truffaut] asking questions, via an interpreter [Helen G. Scott], of the older [Alfred Hitchcock] : the result of their meeting was not only deepening friendship, but also Truffaut's book Hitchcock², of whose existence and history Hitchcock / Truffaut (2015) is right to remind us. 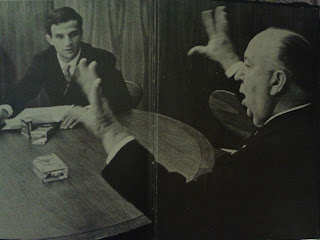 Frontispiece of Truffaut's Hitchcock
Hitchcock / Truffaut is a documentary that is worth watching for what it tells and shows, though not always for how it chooses to do so (please see below). Also, more importantly, because one could easily tease out its various strands³ [which are identified in the end-note] and ask whether one or more could have been given more weight - with the others as subsidiaries, or not included at all.

Since Leeds International Film Festival asks one to rate everything from 1 to 5 (5 being the best), one agrees to slot into that snapshot way of thinking, and - as there had been better films – one eliminated giving it 5, but then it had to merit 4 (as it certainly was not 3). In fact, it is deserving of being scored as 4 just to hear Martin Scorsese talk with masterful intelligence about Vertigo (1958) and Psycho (1960), which, whatever its aims may have been, is the heart of film : his analysis makes us delightfully aware of the cinematic stature of both Hitchcock and of him.

What this Tweet says may, indeed, be what publicity for the film wants to tell us, and, in some senses, we do get a good feel for how all those interviews went – as well as how some of the ironic photography came about, including that used for the poster (in the Tweet above). (If we want to know what resulted from all that interviewing, though, one reads the book itself², of course [and the film does not much tell us how, or how much, the interviews - as conducted and recorded - were 'tidied up' for publication].) On other levels, hearing simultaneous translation prominently taking place at some length can, for those with some ability in French, be confused and confusing, just in the way that watching a film in, and with sub-titles in, one’s own language can be a distraction (even without any discrepancy between them...), if one is needlessly drawn to reading the latter, rather than listening to the voices and what they are saying :

As the whole point of using the footage was to give that sense of the interviews in progress, Helen G. Scott translating simultaneously into French needed to be audible, but it might have been better suited to Hitchcock / Truffaut’s purposes to adjust the volume of her voice, and that of the two men, for its English-speaking audience : relatively speaking, did we actually need to be able to concentrate on (a) Hitchcock and on (b) what Scott translated Truffaut asking or commenting to him (and less so on (c) her translating Hitchcock’s words for the benefit of Truffaut, and on (d) what he said for her to translate for Hitchcock) ?


Presenting the material, just as it was, and expecting the viewer to accommodate to it was one thing that deprived the film of being rated 5. Another, already alluded to (above), was that of director Kent Jones insufficiently deciding, and being clear about, the relative importance of the five or so strands within the film³ [identified in the end-note], and it has been said that Scorsese’s contribution is vital to its appeal and worth. (It does not quite fit in the last of these broad strands, as, unlike some of those interviewed (one just happens to recall Wes Anderson⁴), Scorsese was working in film at the time, and got to see Vertigo through being in film circles, since it was not available otherwise.) 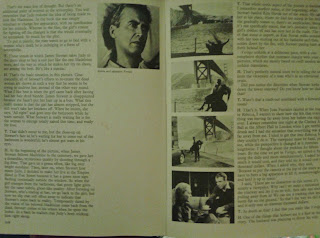 The end-note⁴ has just mentioned that Hitchcock / Truffaut seems too keen to prove to us that it has people who make comments (under one or more of its strands) whose opinions actually matter, and (above) that it seems too undetermined, in what it ends up saying, about what is important : at the danger of overpraising Scorsese’s words, he was actually seeing films such as Vertigo alongside, and without needing the insights of, the Truffaut book. So the film has us stray, without being either sign-posted or having a justification, into valuing Hitchcock’s direction (and his work of preparation for a shoot) as if it is somehow just part of the thesis that the book importantly benefited both Truffaut and Hitchcock’s reputation. 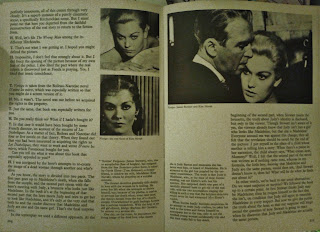 Finally, no doubt it did, but that does not, in and of itself, prove to make a good reason to order the book, expecting from it a good filmic read. Historically, the re-valuation of Hitchcock that it achieved may have been overdue, but it does not mean that the exchanges between the men come off the page (as against in the live segments of interview that we see) with vivacity, or even that some of the territory into which either man wishes to take us may be of interest (except to them) : by contrast, in the Faber & Faber series that may owe it its origins (where film directors are interviewed about their work), a title such as Woody Allen on Woody Allen⁵ takes more time on each film, by usually devoting a chapter to one (whereas five or six are looked at in each of Truffaut’s chapters). 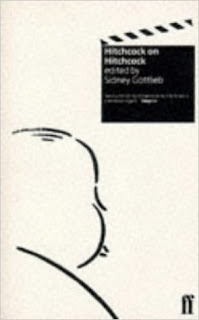 As the sub-title suggests, Faber & Faber's Hitchcock on Hitchcock : Selected Writings and Interviews (1995) offers something different
As against the Truffaut book, cinematographer Stig Björkman’s conversations with Allen have been more closely edited, for its chapters to be flowing and thematically arranged within them, of which one has far less sense with Truffaut's Hitchcock. Although Truffaut did produce a revised edition, Björkman and Allen have had the luxury, since the first UK edition⁵ (it originally appeared in Sweden, in 1993) of re-visiting the work with the passage of time and the appearance of new films. It survives the test of being readable and informative now, whereas – for all the significance of Truffaut’s – maybe it does so not have so much to say now... ?

To dilate, as an antidote to the above, on considering Hitchcock / Truffaut in wider terms [from ‘Actors are cattle’: when Hitchcock met Truffaut, Stuart Jefrries writing in The Guardian (@guardian)] :

'In the book of the interviews,' says [Kent] Jones, 'Hitchcock came over as stilted and formal, which you can hear he isn’t.

Thanks to critics such as Chabrol, Rohmer, Rivette, Godard and indeed Truffaut (all of whom who would become the iconoclastic hipster directors of the Nouvelle Vague), cinema for the first time became, as director Olivier Assayas puts it in Jones’s film, self-conscious. For the first time, it reflected on itself as art rather than dismissing itself as mere entertainment. The Hitchcock-Truffaut interviews were part of that revolution. 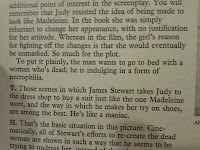 (1) How Truffaut (and his peers) came to esteem the films of Hitchcock, and for Truffaut to approach him with his request

(2) Their correspondence leading up to Truffaut’s visit

(3) The interviews themselves and artefacts of those sessions

(4) The resultant book Hitchcock / Truffaut** and the effect that Truffaut desired from it, i.e. for an appreciation of Hitchcock’s films as works of film-making, not merely as entertainment (not least of all what made them work as ‘thrillers’ in the first place)

(5) Plus some 'talking heads' - other directors, or writers or critics, few on the screen long enough for their contribution to amount to more than bulking out the numbers.


⁴ If, as one is glad to do, one knows films of Anderson’s, there is another form of distraction, but this time on the screen : not only do we have this director (or writer, critic, etc.) identified by a caption (which is always useful, and can easily be taken in), but, in another part of the screen, a short list of films, publications, etc.

The tendency, then, is is to wonder why this film has been mentioned, but not this one (rather than focusing on what Anderson is saying…). So who is this film for that, there and then (rather than built into the credits ?), it needs to be sure of establishing the credentials of those who are shown saying how important Hitchcock or this book of interviews is ?

Stylistically, there is a like tendency, which comes out strongly at times, towards having too much archive / documentary material in view at once : we do not simply have a text on the screen for us to be allowed to read [such as Hitchcock’s quite gracious response to Truffaut - although that actual letter was accepting, but short]. Rather, at the same time as highlighting passages in it, the visual-design of Jones’ team over-busily has it transit across the screen, as well as changing the focus, and shifting us on, by moving other pieces of original material into play : almost akin to some Harry-Potter-like notion of an interactive museum, where, as the Hogwarts portraits do, the exhibits have a life of their own – perhaps entertaining or enchanting, but not an aid to concentration (or low anxiety) ?

Unless stated otherwise, all films reviewed were screened at Festival Central (Arts Picturehouse, Cambridge)
Posted by The Agent Apsley at 13:21 No comments: