What happens on the inside of transgressions...

This is a Festival response (work in progress) to Francy Fabritz's Etage X in the Tiger Shorts programme of Cambridge Film Festival 2017, as screened from 10.30 a.m. on Thursday 26 October 2017 (Day 8 of 8) 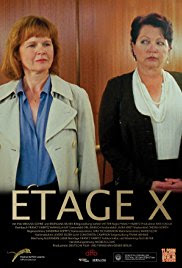 As was suggested in writing a preview for La propera pell (The Next Skin) (2016), the best of cinema appears to us through our senses, but – with contemplation and time – extends and opens outwards in our head : the preview has yet to be completed (and, throughout #CameraCatalonia, has remained ‘a work in progress’), but this is certainly true also of Incerta glòria (2017), which is not just or only ‘about’ its apparent subject…

The apparent subject here, without (until below – in an overtly ‘spoilery’ section) saying too much about it, is about an apparent encounter between two women, who apparently did not know each other before, in a space that ends up both confining and liberating them. The film, however, is not really about this at all, but about that notion of the liberation of being confined (or, put another way, finding confinement liberating) – what that means and what stems from it in the generality, and in no way rooted to or in this encounter.

One can state this view with assurance, almost dogmatically, because - from the film-making perspective, and, within short-form horizons, given a careful and detailed treatment here - no one invests that energy in what some could see, enjoy and think of just as a shocking quip : if a viewer reduces Etage X to such a quip, which is, at best, to be narrated to someone as a piece of boundary-pushing humour that he or she saw at Cambridge Film Festival, then that understanding almost wholly misses the ambition(s) of the creative crew and cast.


So, the fictive space of a lift – we watch too little film, and not because the space is not well created, if we do not credit it for what it is – has ever been inviting as well to covert lovers as to those who wish, as Emily Kuhnke does in the ambiguous setting and time of Der Aufzug (2012), to juxtapose the tics and personal façades by which, whether that is what we will, we mark ourselves out in the world. Kuhnke’s film, though, has far more of what Beckettt, in Malone Dies, calls the ‘come and go’ of life (he was later to call what he styled ‘a dramaticule’ by this name), whereas Fabritz locates changing positions of power within a cast of barely three : the whole is greater than the sum of the parts, by virtue both of the vertices of what may, without thought, seem a slender conceit, and how Morgana Muses and Eva Medusa Gühne (superb names) have been guided and led to play out the internal logic of its interior.

Click here [when the link is activated] only if you seek a spoilery, post-Freudian, LGBTQ+ consideration of the sub-textual in Etage X

Unless stated otherwise, all films reviewed were screened at Festival Central (Arts Picturehouse, Cambridge)
Posted by The Agent Apsley at 04:05 No comments: