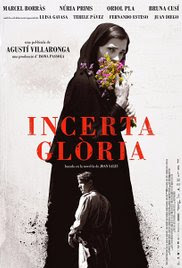 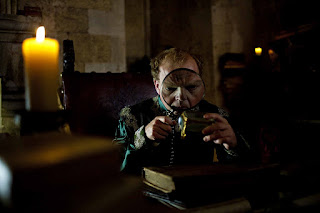 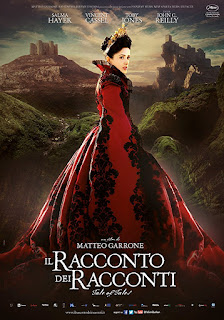 It would be very poor scripting, if it were not obvious that this preview values Incerta glòria much more highly than any figures from box office (or budget) – let alone any notion that Tale of Tales ‘must be’ better, because it has the said Toby Jones, and even Salma Hayek, on its cast. What it did have is a relevant portrayal of monstrosity and / or evil, and what Incerta glòria has is a much more nuanced one – one that even blurs the lines between parable, prophecy and the past (as was conceivably even implied by the very title Tale of Tales).

By contrast (whatever turns Tale of Tales may take to seek to surprise), the attitude that Incerta glòria (2017) adopts is not a binary one, of knowing / choosing good from evil, and with that being that – even though that dichotomy, if not simply on its own, is at the root of Guillermo del Toro's excellent Pan's Labyrinth (2006) : if Ofelia (in Pan's Labyrinth, set in the Spain of 1944) knew for sure how to do it (which is the point of the story), the film locates itself - through her - in opposition to her step-father Captain Vidal and his hunts for the anti-Francoist Maquis. (As with C.S. Lewis and his seven Narnia novels, it is on its supernatural - allegorical – level(s) that is made powerful.)


Not for the first time, Lewis’ all-embracing world of Narnia [in childhood, his brother Warren (‘Warnie’) and he co-created such a world (Boxen)] shows us a character, in Jadis (The White Witch - the name is French for 'formerly' ?), with sociopathic behaviour : Edmund is seduced, by the warmth of her sleigh / furs (all highly sexually suggestive, just as Meret Oppenheim’s famous fur-covered saucer, cup and spoon), but seduced into what ? Into betraying his brother Peter and sisters Susan and Lucy to Jadis… (A connection here to Camera Catalonia from three (?) years ago, with Fill de caín (Son of Cain) (2013) – on (and on the way to) the river afterwards, #UCFF chatted to its director, Jesús Monllaó, about traits of ‘being successful’.)


It is not just because we have a longer treatment, in Incerta glòria, than in the other films of this year’s Camera Catalonia that it is likely to be the most affecting film in the strand, but because it very poignantly treats of the subject of The Spanish Civil War*, which is often near to Catalan hearts.

In this year's #CameraCatalonia, programmed as ever by Ramon Lamarca, he's a faithful companion to Marcel Borràs :https://t.co/B0pUkfhtGC pic.twitter.com/OsCLuOlfxF
— THE AGENT APSLEY (@THEAGENTAPSLEY) October 19, 2017

Initially, we may be reminded of Pa negre (Black Bread) (2010) for historical re-creation and verisimilitude : a film from the very first time that #CamFF programmer Ramon Lamarca brought Catalan cinema to Cambridge Film Festival, in 2012, and – as one recollects – so popular that a third screening was put on.


A very careful (i.e. non-obvious) use of colour-grading, and the textural quality of the set-design and / or chosen, built location, are just some other reasons to love the look of and enter into the world of this film (and watch it multiple times, to see it unfold differently, with a knowledge of the beginning from the end) ; as with Pa negre, one retains the underlying sense of a filmic presentation, but a very subdued one, which allows one to couple with that of falling more and more deeply into its Weltanschauung : except for films that desire to alienate, this just is a feature that tends to unite the best of cinema.

* So called, at any rate, as we heard from Professor Paul Preston, when he accompanied co-director Jordi Torrent (@nycjordi) for the Q&A after Héroes Invisibles (Invisible Heroes) (2015) (subtitled Afroamericanos en la Guerra de España, which #UCFF interpretatively rendered as ‘The part played by Afro-Americans in The Spanish Civil War’, and so not decribed as a ‘civil’ war).

Unless stated otherwise, all films reviewed were screened at Festival Central (Arts Picturehouse, Cambridge)
Posted by The Agent Apsley at 02:00 No comments:


-> So Alexandre Desplat's scoring it was a bonus, and - despite huge (intentional ?) ambiguity about era - that the costumes were so good.
— THE AGENT APSLEY (@THEAGENTAPSLEY) August 8, 2016


-> Despite acknowledged rootedness in Giambattista Basile's work, one can find Chaucer (The Wife of Bath's / Clerk's Tales) and Gormenghast
— THE AGENT APSLEY (@THEAGENTAPSLEY) August 8, 2016 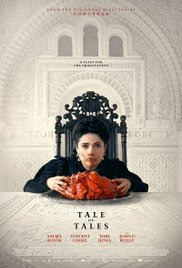 Salma Hayek as The Queen of Longtrellis [an unnecessarily literal translation, from her title in Basile's Neapolitan text ? - which we never hear]


As tales (incl. Canterbury ones) that teeter between talking of life and our incredulity, the cinematography held us https://t.co/sYlLZTBVfF
— THE AGENT APSLEY (@THEAGENTAPSLEY) August 8, 2016

Did the fleshiness of bird and fowl *appeal* to Salma Hayek, or was that bought ?
— THE AGENT APSLEY (@THEAGENTAPSLEY) August 8, 2016

Thanks for the Retweets, @Saffronscreen !


-> As to his, one endorses 'dream-scapes', and the camera being 'always on the move', and in hers to 'baroque' and 'indulgently langorous'
— THE AGENT APSLEY (@THEAGENTAPSLEY) August 9, 2016

Unless stated otherwise, all films reviewed were screened at Festival Central (Arts Picturehouse, Cambridge)
Posted by The Agent Apsley at 15:22 No comments: