This is a review of a gig by The Elliot Galvin Trio, who played during Cambridge International Jazz Festival 2019 at Darwin College, Cambridge,
on Tuesday 19 November 2019 (after Sam Leak Trio as support from 7.30 p.m.)

A gig by The Elliot Galvin Trio, as one very rapidly recalled from Cambridge International Jazz Festival 2018, is an immersion in nigh-flawless technique, and a wildness that, although studied (with, for example, Elliot Galvin’s palpable care in the use of discords or in the exact effect and execution of a placed, different dynamic), is nevertheless evidently and wholly authentic and spontaneous. 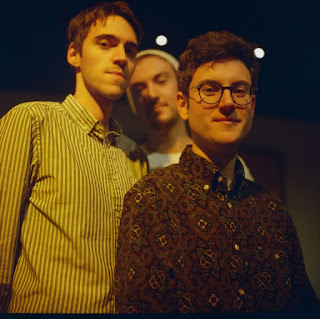 It was also to turn out that the trio was giving us, in one full dose, a seamless mélange of what constitutes the A side of a direct-to-vinyl recording that it made earlier this year in Haarlem², in The Netherlands : nothing about the brilliance of the playing or the interplay between the performers required us, in the manner of applauding solos, to recognize it until after they decided upon an end-point, which we preferred as much as they did, and then the appreciation was widespread and full.

There is not a dead or redundant moment here, but pure power in creation
Meanwhile, another affect had come in this EP of a set within a set, with the in-the-moment bells, chimes and peals as a fusion of the constituent instruments (which was our experience, whatever they played), which yet leaves distinct their special characteristics, and with riffs, patterns, and variations in delivery to match the Zeitgeist and mould the mood, from swinging to extrovert syncopation - but all with energy, commitment and self-belief.

The members of the trio were playing and toying - all at once - with the material, the physicality of the instruments, each other and us. As the matter had now become wholly pattern, after an almost-right-inside-the-piano segue, we heard the fluidity of movement as blocks of sound, and then it shifted again, into a witty, ironically trotting number, with synergy and symbiosis between Galvin and Dick :


Surprise me again, with your high-octane brilliance !, we probably all thought
Then, when we could have imagined no such thing (and we probably wished that the bursar wasn't listening), a massive explosion of bass-sound from Galvin - again, that employment of stunning technique in the service of the moment - followed by what can only be described as a hammering and leathering of the piano. In time, a decrescendo and diminuendo, and a repeat of that explosive bass-effect, brought to a close around twenty-five minutes without a break - keenly met by the audience with applause.

In continuing with tracks from Modern Times³, after Galvin had re-introduced the trio and the concept of both the album and its direct-to-vinyl recording², the opening piece, at least, was a whole other side to poise and feel. With wistfulness (and a slight intimation of personal tristesse ?), Galvin had remarked that, fittingly for playing in a college named after Charles Darwin [as an example, mebbe, of the non-survival of the fittest ?], it centred around the captured cry or call of of a member of a species (a male), of which no other exemplars by then existed to heed (if not hear) it.

When that number was over (and, not having expected the bird-notation of Olivier Messiaen (e.g. Catalogue d'oiseaux), one did not spot the debt to ornithology), the group waited in silence for just the right moment : not, as we might have expected, unti the nearby sound of girls' voices had gone, but when Corrie Dick loudly proceeded. Other material in the first set of tunes had also lounged a little, but Galvin now gave us a very louche statement of a theme, and on whose cue there was an instant improvisatory pick-up by McCredie and Dick, and 'riding with it' - into beats, off-beats, transient time-signatures, and generally swinging / rocking the theme.


Energy, excitement and ebb and flow hook us willingly in - and keep us there
As the title of this gig-review says, in bringing back the ‘lounging’ tone, and pausing or pacing it, there was an absolute certainty of composure, of sensing the direction to go and / or be led in. (The contrast is with when a presenter of a (sometimes live) t.v. or radio programme claims (to be about) to 'explore' what has been determined, and thus even the listener's own exploration is at best by dubious proxy.)

That precision, again, from Galvin in what – in the moment – is aimed at, and in making each and any gesture be heard all of a piece : against a drone on bowed double-bass, Dick set up a groove for Galvin to join, all with looks of engagement and enjoyment exchanged, and then laid back on the beat in easeful expressiveness, before note-values, tempi, accents and dynamics were all delightfully a-shift once more.

As if in a kind of classical ternary form, this section of the second set of tunes moved between being energetic and full, and spare, tender and light, and with McCredie sliding tones and pulling the tonality. Keeping it fresh, and with no one with a nose in a score, the trio worked up a bluesy number, which they stretched out and beefed up, until that drone recurred, now with unreal touches worthy of Surrealist artist Yves Tanguy, what sounded like a Scottish tune, and a 'Philip Glass' riff on bowed bass to close.


Galvin announced the encore as 'Red and Yellow', and proceeded to play with the vigour of a Conlon Nancarrow composition for Player Piano (for example, Study for Player Piano, Op. 37). As ever, form and content were inseparable, pleasing in such a way that one was smiling to hear this music, and with an irresistible want to tap one's foot, nod along, and play the drums with one's reviewing-pen !

Sheer magic, in one intense set, and, although one can be reminded of 'the tunes' in the album Modern Times on CD, etc., this is music that one will want to hear live - more than once.

² For more information, attend a gig, or read what Edition Records says here about this process :

Lovely review of our gig at @CamJazzFest Wednesday. We play our last gig of the year on Friday at #PurcellRoom @southbankcentre @LondonJazzFest alongside @LauraJurd trio. Only a few tickets left, so grab one while you still can! ⏰ https://t.co/HnMV4ckV5w
— Elliot Galvin (@ElliotGalvin) November 21, 2019

³ In conversation afterwards, Gavin agreed that the allusion to Chaplin is intended (he is on the cover, indeed).

Unless stated otherwise, all films reviewed were screened at Festival Central (Arts Picturehouse, Cambridge)
Posted by The Agent Apsley at 17:37