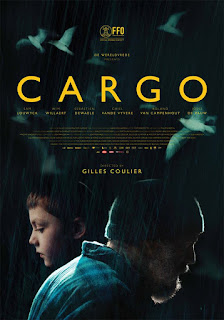 April McIntyre’s (@AprilMcIntyre’s) review for TAKE ONE is here…

One suggests that, although it owes not a small amount to Manchester by the Sea (2016), Levaiathan (2012) [the trawler one], and Cassandra's Dream (2007), it's a film that works on the level of gestures, not even episodes - we can't believe that a guy just starts driving lorries.
— THE AGENT APSLEY #ScrapUniversalCredit (@THEAGENTAPSLEY) October 25, 2018

But - there's a but - he's only really driving a lorry so that he witnesses what he sees for the moment that will riff on Fire at Sea or The Breaking Point... but with a very tenuous 'moral' choice.
— THE AGENT APSLEY #ScrapUniversalCredit (@THEAGENTAPSLEY) October 26, 2018

* Are some scenes of violence just extraneous to the story, or even convenient pegs to hang it on ?

Unless stated otherwise, all films reviewed were screened at Festival Central (Arts Picturehouse, Cambridge)
Posted by The Agent Apsley at 13:55