Mathematics for the Million (after Hogben) ?

Except as far as the first part of the film is concerned, the title How I Came to Hate Maths is somewhat misleading*, for we actually spend much time with people who are studying, or employed in, higher-level mathematics…

Contrariwise, some seem to have complained that the film is not what it does not seem to try to be, which is a sweeping account of how mathematics affects our lives and what mathematicians might be like : one, in particular, with an unusual dress sense and a striking scorpion fashion-accessory (pictured below), speaks very potently about what mathematics is and what the prize that he has gone to India to be awarded means to him. 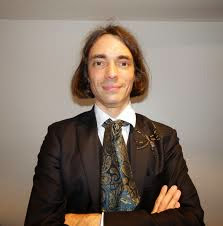 Cédric Villani, who won a Fields Medal in 2010
He, and another Frenchman, who teaches the subject, both also touch upon (as the start of the film does) the changes in presenting it that brought about what the appropriate generation would know as The New Maths, when textbooks such as that of the Midlands Mathematical Experiment were being used (for some reason, Sarah Dillon, in her review for TAKE ONE, seems to interpret this development as a specifically French one). The film makes clear that The New Maths was not, as it might be in another subject, a change in emphasis or on techniques used to understand concepts, but redefining, at much greater length, such things as what one might mean by a straight line.

What is equally clear was that there were winners and losers, in, respectively, those who related to this approach, and those who found themselves excluded by it, but also that the change itself is still not viewed, all this time later, as having been self-evidently right, but having been partly influenced by forces and paradigms outside what is essential about mathematics itself. For those who get to study mathematics in depth, those matters may be less material, and it is with them that we spend most of the film.

Some mathematicians have religiously defended maths as being on the arts side, as if to defend it from being tainted by the sciences (by not being seen as creative). One mathematician, however, was keen to stress how studying the patterns created by dripping honey onto toast, as both one moves in relation to the other and the speed of the falling material changes, is actually relevant to laying cable on the sea-bed, so that it falls smoothly and does not make those convolutions.

Maybe we duplicated our attention unnecessarily in seeing two ‘retreats’ / summer schools for mathematicians (please see comments below as to whether the film could have been ‘trimmed’), in one of which they even made seating plans so that each person sat at table with every other person at least once (hardly a higher-level mathematical task since, once a program had been devised, the names could just be slotted in each time) – and maybe it would have been nice to have heard more interesting comments from those working for organizations such as Google® than appreciation of the topology of a favourite (commissioned ?) sculpture…

In reviewing the film, Sarah Dillon takes issue with the time devoted to high-speed (or quantum) trading, as if this is somehow peripheral to the subject of mathematics, although a former academic mathematician, Jim Simons (who set up Renaissance Technologies), is at the heart of what has been happening with computer-driven decision-making. Dillon claims that :

The film loses its pace when it moves away from this world [that of ‘higher-level mathematics research’] in order to address the role of mathematics in the global financial crisis. Whilst this is clearly an important contemporary moment in the story the film is telling, the film spends too long on it – cut by about fifteen minutes it would have been a good end to an otherwise perfectly balanced piece.


Just on the figures and with a run-time of 110 mins (and, as remarked elsewhere, The Queen’s Building at Emmanuel College does not, in its lecture-theatre, have the most comfortable seating in the world), that would mean cutting it to around 95 mins. However, Dillon must be mistaken in thinking that the film’s financial focus took it this much out of her ideal proportion – for, although she may have had a stopwatch on it, fifteen minutes would seem more like the total ‘spend’ on that topic, not the amount by which it could have been shortened. The Tweet embedded now at the top of this review is meant to suggest further why such things matter to us all...

That said, as long as one credits the meaning of the world economy, and that global trends ought, because governments subscribe to its having significance, to be allowed to crush the lives of millions who are not at fault, quantum trading in commodities, futures, etc., will continue to have the potential to cause chaos. Couple that with the incident that occurred on 6 May 2010, which has been trivially called The Flash Crash (and which no one in the film seems to be able to explain in detail), and it must be right to question what high-speed trading has led us to, and what it might lead to again : in something of the order of 30 minutes, 10% was lost from the value of the Dow Jones, only to be gained back within the day.

Trader charged with manipulation that contributed to 2010 "flashcrash" http://t.co/aIT7M2alOC pic.twitter.com/aWm2Ydypiw

Some human decision-makers would have ‘held their nerve’ and traded their way out of the position, others, seemingly along with the automated trading that was going on at phenomenally high frequencies, would have ‘cut their losses’ – and all over what, as no one even identifies market insecurities as being responsible to so-called positions collapsing? These are the Modern financial instruments, and does not a film about mathematics fitly ask some questions about this, when mistakes in super-string theory, not even mentioned, do not damage people’s pension-funds ?

People who like to talk about Google sometimes speak of its algorithm (as if that explains anything, when there are countless algorithms in how it is put together, not just one). With trading, we are essentially talking of the effects of one program going through the contingencies, which have been dictated by the program-steps, over and over at enormous speeds, coupled with that other programs doing the same, each at the same time, and in a process of not necessarily predictable feedback, shifting their stances / responses. Possibly a massive game of crying wolf, such as unautomated trading could also give rise to, but where one could never go back to who cried it…

The calm tone of acceptance of Wikipedia®'s article also makes for alarming reading !

For his Movie Evangelist (@MovieEvangelist) blog (up to Day 9 of 11 so far in writing up the Festival), Mark Liversidge wrote this review, which, at two paragraphs, is rather on the short side :

Although Mark is certainly right that it is a kind of anthology, in that it begins with maths teaching and rarely, if ever, returns, one has to ask Where (in the film) is it suggested, let alone stated, that it intended 'to come close to helping those in the “normal person, hate maths” understand why maths is so cool to those of us in the other camp' [word missing, but Mark divides the world in two : 'those people like me who are good at it and enjoy it, and normal people who hate it'].

But what if the film actually is what it says, an anthology of reasons (such as high-speed trading) to hate maths, not like it... ?


For there was also, as well as implicating mathematics in the minutiae of trading, mention of how those algorithms had been written to automate lending criteria - although it was less that automation was inappropriate, but that human oversight both of the parameters, and of the resultant body of lending within a portfolio of risk, was defective.


Unless (as some will boldly still have it) one discredits such banking as one of the factors in this world economy of ours, the point is likewise : another instance of giving over the task of making decisions about risk to a program, and not seeming to check it or its ongoing performance, as if computers will necessarily do what we would have wanted.

* And it is far from obvious that it conveys the same message as the original French title, Comment j’ai détesté les maths.

Unless stated otherwise, all films reviewed were screened at Festival Central (Arts Picturehouse, Cambridge)
Posted by The Agent Apsley at 08:42 No comments: