What more is Catalan cinema ?¹ 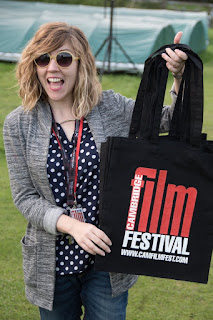 Camera Catalonia at Cambridge Film Festival
It's the inevitable filmic follow-up to What is Catalan cinema ?... !

Three years ago, leading up to the third season of Camera Catalonia at Cambridge Film Festival [then in its 34th season], the question was posed What is Catalan cinema ? - in answering which, some of the defining features seemed to be :

Catalan cinema : Does it fit descriptions such as Sassy / Sexy / Surreal / Sensuous / Subversively ritual, and bathed by the Mediterranean ?
— THE AGENT APSLEY (@THEAGENTAPSLEY) June 12, 2014

Yet, as well as all these things (which, along with the Catalan films from 2012 to that date, are considered in more detail in What is Catalan cinema ?), succeeding seasons of Camera Catalonia have shown that the autonomous region in Spain called Catalunya – which, as with Scotland, some would see have a greater, independent status [highly relevant at the time of revising this piece...] – gives us cinema that :

* Remembers its history, right back to when Spain took control of Catalunya, in Claudio Zulian's (claudiozulian1's) thoughtful Born (2014) (@Bornfilm), reconstructing a few connected lives at the time of the War of the Spanish Succession (1701–1714), with Vicky Luengo a most desirable mistress to Josep Julien and the sister of Marc Martínez (Julien’s wealthy debtor, until Julien proves to back the wrong side in the war…) 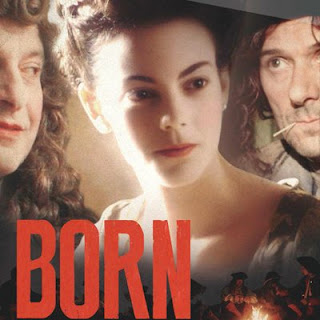 * In the Catalan people, presents ones as reserved as the British, who - in two films that star the radiant Nora Navas (Tots volem el millor per a ella (We All Want What’s Best for Her) (2013) and L’adopció (Awaiting) (2015)) – manage to avoid talking to each other, but try to make happen what they assume should happen. In doing so, do they seem to lose sight of who is getting hurt, and for what real reason... ?

Find it here, as it's written and posted, before #UCFF can tell you on 8 September more about Camera Catalonia... :https://t.co/98qnF063z9 pic.twitter.com/rVwmLw5R8m
— THE AGENT APSLEY (@THEAGENTAPSLEY) September 5, 2017

* Looks to literature such as Shakespeare, either in the feel - in Barcelona Summer Night (Barcelona, nit d'estiu) (2013) - of A Midsummer Night's Dream... 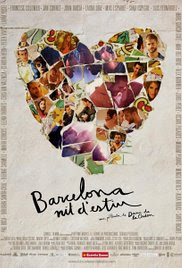 Or, in Hammudi al-Rahmoun Font's shocking telling of a classic tragedy, in Otel.lo (Othello) (2012) : 'OTHELLO is a cinematographic essay about power, desire, jealousy and deceit ; a thought on the boundaries between fiction and real life' (from IMDb) 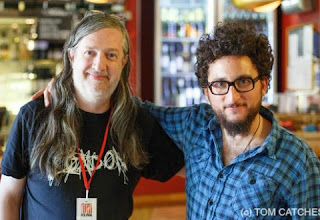 Hammudi (with The Agent) at Cambridge Film Festival 2014
* Films as diverse as Ficció (Fiction) (2006), Fill de Caín (Son of Cain) (2013), and Menú degustació (Tasting Menu) (2013) are, in their quite different ways, further evidence² of flexibility in, and of creative thinking about, employing conventional elements of story-telling - and of both the expectations to which their nature gives rise and what writers and / or directors do to subvert them

* Or they do not subvert them - but surprisingly please, in Traces of Sandalwood (Rastres de sàndal) (2014) [this link is to TAKE ONE’s (@ TakeOneCinema's) review], with its Bollywood-infused tale of the (in)credulity of a loved and lost young girl, who is adopted into a Catalan family, and cannot believe that an Indian film-star knew her as a child - because she is her sister ! 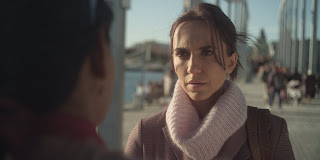 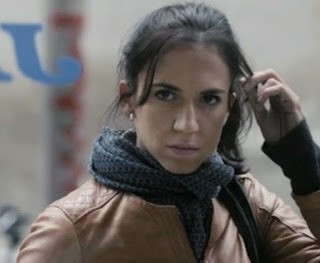 Aina Clotet, as Paula (Sita) - meeting her sister Mina (Nandita Das), and, later, reflecting on herself, and her identity 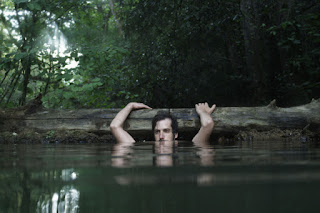 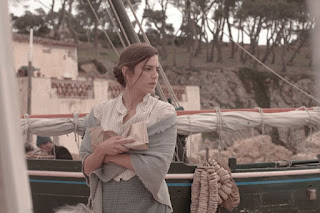 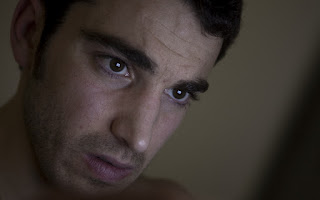 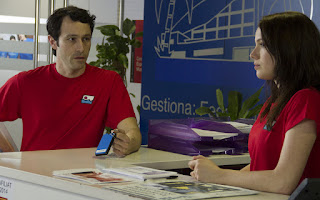 (Upper) Rubén de Eguia and (Lower) Albert Ausellé and Diana Gómez in El virus de la por (2015)
* Finally, documentaries by Catalan directors - although now listed in the Festival's main sequence (alphabetically with the others and the feature films) - tend to explore identity and connections to Catalan history, whether telling of the band-leader Xavier Cugat's career in film and music, during which he introduced Latin orchestration and rhythms to dance-music and Hollywood films and t.v. (although, which was probably little known, Cugat had been born in Catalunya, but had been an emigrée to Cuba with his family when young), in Diego Mas Trelles' Sexo, maracas y Chihuahuas (Sex, Maracas & Chihuahuas) (2016) 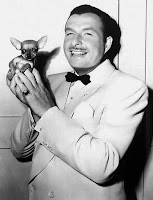 Or - in another realm of translocation - telling of how much better treated and regarded Americans of Afro-Caribbean descent were during their time in Spain (fighting the fascist forces of General Franco) than in the States - especially after going there. So #CamFF 2015 guest Jordi Torrent (with his co-writer / director Alfonso Domingo) showed in Héroes invisibles : Afroamericanos en la guerra de España (Invisible Heroes) (2015) [for which #UCFF interprets the sub-title as ‘The part played by Afro-Americans in The Spanish Civil War’], to the extent even that records that proved their participation hardly (were meant to) be available / survive 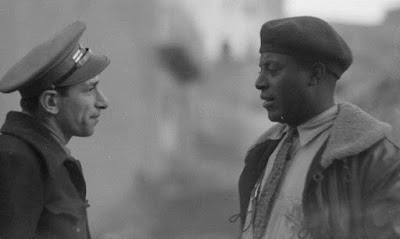 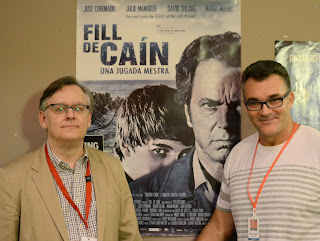 Ramon Lamarca (left), with Festival guest Jesús Monllaó (before the poster for Monllaó's
Fill de Caín (2013)) - by and courtesy of David Riley

Catalan cinema - to judge by the films that Camera Catalonia programmer Ramon Lamarca (pictured above) brings to Cambridge (and also the ICA (@ICALondon)) - is high-quality work that values its audiences enough to respect them :
Join us for the sixth year of a Catalan strand at Cambridge Film Festival, Camera Catalonia, to see why he and #UCFF give it due regard

¹ A deliberate nod to the inelegance of following up Analyze This (1999) with Analyze That (2002) (fairly criminally unwatchable, unless being very kind - for their other, better work - to Crystal and De Niro ?)... [Cristina Roures, pictured, is the Festival's Operations and Hospitality Manager (and, of course, is Catalan).]

Posted by The Agent Apsley at 16:01 No comments: