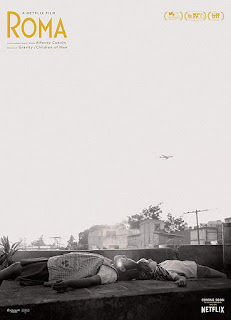 It is brought to us by writer / director Alfonso Cuarón, whose Gravity (2013) one readily agreed had the plot of a B-movie and dubbed Gravy. There, three national space-vessels give us three world religions - here, it is earth, water and fire.
— THE AGENT APSLEY #ScrapUniversalCredit (@THEAGENTAPSLEY) November 2, 2018

On Closing Night at @camfilmfest [Day 8], who stayed to contemplate the sky in Roma (2018) to which we panned and rotated upwards, and across which a plane - maybe the same plane - has several times passed ?

As previously Tweeted, these are the actual closing words of @alfonsocuaron's film [which are not in the video-clip] :

So, of those in Screen 1 at @CamPicturehouse afterwards, who actually did see the whole of @camfilmfest 2018's Surprise Film... ? ;)
— THE AGENT APSLEY #ScrapUniversalCredit (@THEAGENTAPSLEY) November 3, 2018

Unless stated otherwise, all films reviewed were screened at Festival Central (Arts Picturehouse, Cambridge)
Posted by The Agent Apsley at 18:23 No comments: