This review is of a screening of People on Sunday (Menschen am Sonntag*) (1930), which was a special event at Cambridge Film Festival 2014 (#CamFF) on Friday 5 September at 4.00 p.m.
The naturalness of director Robert Siodmak’s People on Sunday (Menschen am Sonntag) (1930) beguiles us, and persuades us that what we are seeing might be true – an effect that is part of the immediacy of Neil Brand’s (@NeilKBrand’s) and Jeff Davenport’s live accompaniment.

Even for those of us who could construe the German in the slide at the beginning, and learn that what we were about to see was around 90% complete (some 1,800 metres of a known length of around 2,000 metres), nothing seemed to be missing, and the restoration was so clear that it did not leave us distinguishing different parts of the footage.

After the event, what one is left with is the impression of the morals and activities of the weekend in Berlin, spent by the lake at Schildhorn, and one has to pinch oneself and say that this presentation of life (outside of the candid shots of contemporary Berlin) is no more truthful than a newsreel of the day : that is the power of cinema, and of exposures that were not only clear, but insightful and affecting, that they can speak to us to-day when care has been used to present them alongside themes that match their moods, but had a feeling if not always of energy as such, then of being alive. 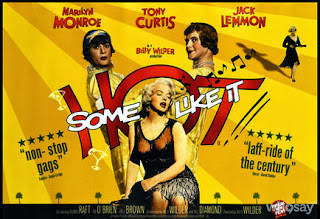 That, too, is something that we would come to associate with screenwriter Billy Wilder, whether in Some Like it Hot (1959), or Sunset Boulevard (1950), and is as good a reason as any to be interested in this film…


Over at TAKE ONE, Mike Levy has more observations about the film / performance...

* Might we still write Menschen am Sonntag, or would it more often be Leuten - without the full sense that these are real, human people ?

Unless stated otherwise, all films reviewed were screened at Festival Central (Arts Picturehouse, Cambridge)
Posted by The Agent Apsley at 22:06 No comments: