Song to Song : Much better made than Knight of Cups, but still well-made tedium

This is an [accreting] reaction to Terrence Malick's latest, Song to Song (2017)
More views of - or before - Cambridge Film Festival 2017 (19 to 26 October)
(Click here to go directly to the Festival web-site)

This is an [accreting] reaction to Terrence Malick's latest, Song to Song (2017)

Though much better made than @knightofcupsmov, it remains well-made tedium, with zero conviction that Fassbender makes Gosling or Mara stars pic.twitter.com/Qjg1coERYe
— THE AGENT APSLEY (@THEAGENTAPSLEY) August 23, 2017

Not explicable even by @songtosongmovie's inner conceit that Cate Blanchett (Amanda) is more alive / less unreal, she outclasses the others. pic.twitter.com/mpXkQYPLPy
— THE AGENT APSLEY (@THEAGENTAPSLEY) August 23, 2017

Nothing that Stephen Poliakoff didn't do better in Friends and Crocodiles, or Truffaut or Sorrentino in Jules et Jim or La grande bellezza ! pic.twitter.com/J7GNzUKeM0
— THE AGENT APSLEY (@THEAGENTAPSLEY) August 23, 2017

Plangently voiced over by Rooney Mara (Faye) as :

We thought we could just roll and tumble, live from song to song, kiss to kiss.#SoWeSaw pic.twitter.com/YzM3sx2tE8
— THE AGENT APSLEY (@THEAGENTAPSLEY) August 24, 2017

By all means, it can pass for a point that all this looks cod, because it's stale / has lost its savour, but lost-generation stuff - again ?
— THE AGENT APSLEY (@THEAGENTAPSLEY) August 25, 2017


His being an auteur, Terrence Malick can, of course, interpret that to mean doing what he wants - desiring, as his characters* grandiosely emptily do, 'to be free', and / or 'to set others free' (sc. delude themselves, and / or screw others over, in the name of Freedom).

If Malick chooses, he can have us infer (and maybe agree) that he is painting with light, and that we are redundantly seeking a narrative (which he does not actually have, and so cannot deny us) - until he then gives us one, of sorts, but only once he has had his way with our mind, with his fractured slices**.


The travel of Song to Song is from deliberately momentary snatches of the past - which have been blanked out by the actors, in confused guilt and shame at having been paid to arse around implausibly on camera - to healing (and, of course, the pay-cheque).

However, this only comes through expressionless (and barely cleansing ?) confessional utterances, spoken to God knows whom (an on-line diary, via voice-recognition ? or a very professionally indulgent therapist ?). Thus, if just as implausibly, they become reconnected with good, honest, Tolstoyan toil on - dare one say so ? - the soil that they had spurned.


In essence, the road's shown to be tough, but (for actors, at least) healing for careworn hedonism can be won by lost wild-child rockers-in-their-heads stars of screen !

* The Diamond as Big as The Ritz ~ F. Scott Fitzgerald

* If we may rightly call them that... Gosling, though perhaps never heard called that, is credited as 'BV' = boundlessly vacant, as Gosling usually does / is, or boulevard verdure ?

** Naturally, Woody Allen and Charlotte Rampling (as Dorrie) did this with far greater impact in Stardust Memories (1980).

Unless stated otherwise, all films reviewed were screened at Festival Central (Arts Picturehouse, Cambridge)
Posted by The Agent Apsley at 14:28 No comments:

How Many Children Had Lady Macbeth ?*

With Tweets added, and owning that Paddy C. is better than Marion C. than Michael F., a review of Macbeth (2015) : http://t.co/O7wKA6jMOg

Some of the inventive ways in which the Shakespeare play has been transmuted in this film simply will not have people seeking out the original, because they probably will not conceive that the play (in the form, at any rate, in which it has come down to us) has here been (in places) very much abridged, or that material has been relocated within it (sometimes within an immediate context, sometimes scarcely so, and even to the extent of introducing repetition) : at other times, it will be clear that, under licence, painting with images or with poetry are part of this endeavour. (This will be evident without anyone needing to know that it is those who have edited Shakespeare, over the centuries (and by a process of inference and deduction), who have given us both scene-locations and some of the usual printed stage-directions (e.g. as to who is on stage during a scene, and when he or she enters or exits), and thus that a licence to do something different, if it were needed even in the theatre, can be claimed.)

Where many are most likely to come unstuck, however familiar they may be with the text that we have from the so-called First Folio of 1623, is with the bewilderment that is the film’s ending : none, almost needless to say, of the pat wrapping-up, in however mournful rhyming-couplets (which we might also recall from the close of Lear), but instead much confusion of image and action – of thought, word and dream.

Thereby pursuing, relentlessly and acceleratingly, the blurring of sleeping and waking that builds across the film : just as the verse-speaking, simply gorgeous at the start (and therefore bringing tears at its beauty), becomes more and more degraded by fury, frenzy, and fire. Just, likewise, as Jed Kurzel’s score**, which began with so much heart-breaking keening and Celtic intonation, ends – through partway beginning to incorporate electronica – in quite another mood, and place. [He is sure some relation to director Justin Kurzel, being credited with scoring his Snowtown (2011) (amongst others) ?]).

Initially, battle-scenes in Macbeth (2015) reminded of Mel Gibson as Wallace, but much more like the immersive visuals at @N_T_S Culloden ?
— THE AGENT APSLEY (@THEAGENTAPSLEY) October 3, 2015

On all of these levels, then, Macbeth (2015) both is and mimetically embodies a journey into night, and it slips further and further into it, whereas Shakespeare’s protagonist will have it that sleep has become elusive to his ambitious quest : 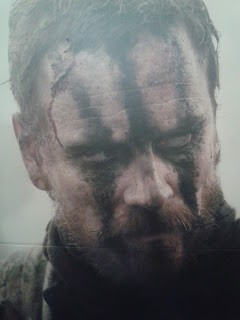 Except that, in fact, what distinction is there between whatever ‘reality’ is and the distracted snatches of the world that come to us as part of and, to some significant extent, filtered through the medium of Macbeth’s mind, mood, and soul ? (Which makes the screenplay, and its approach to the text itself, quite sympathetic (as, with some musical instruments, ‘sympathetic strings’ are), in wanting to make interpolations and transpositions within it.) Nonetheless, the direction may have strayed, by trying too hard to give us a visible basis for others’ opinion, such as reported here (as well as co-opted from Macbeth’s attempts at self-diagnosis), in the form of montage ? :

Great Dunsinane he strongly fortifies.
Some say he's mad ; others that lesser hate him
Do call it valiant fury

With some material, such as the case of merely truncating the interchange between Ross and Macduff (at the end of Act IV) to concentrate on one principal topic, the screenwriters give us Macbeth pretty straight ; with other parts, they bend them very much more to their will, and for a broad variety of purposes, such as :

* In the opening (crimson) captions, as well as explicating the origins and significance of - and forces behind - the conflict that we see, even naming a battle (that of Ellon)

* To clarify how it is that Macbeth becomes / expects to become king (which, it is arguable, is not the strongest element in the idea of eliminating Duncan / committing regicide)

* In doing so, and almost certainly on no naturalistic level (but rather on that of will (again***)), characterizing Malcolm’s impulse to flee – which is exemplified in the text, and at its peak, at the moment when Macbeth puts the witches under obligation****

* To expand Lady Macbeth’s familiar scene with the doctor into the general theme of sleep-walking into the future (which not a few ages have liked as an idiom), and thereby dis-locate time and space****

* In a linked way, to widen the scope and role of the witches so that they permeate the totality : in their two-handed Macbeth (in the building in Cambridge that is known as The Leper Chapel), Richard Spaul and Bella Stewart of in:situ made enchantment and being bewitched central to the production

Is there danger in the fog of intense screenings at Cannes, and could @FilmDivider's review have gestated longer ? : http://t.co/rJFwZwUab8

* Quoting the title of the essay by L. C. Knights, ’How Many Children Had Lady Macbeth ? : An Essay in the Theory and Practice of Shakespeare Criticism’ (Explorations, New York University Press, 1964, 15-54).

** It would be so useful to pause the credits (during which so many others, blocking the screen and chattering, leave), because there are also ones for improvisation...

*** Endlessly shown in train, in literature and religious writing (which, from Paddy Considine’s Banquo, one feels that he well knows), from the Cabbalistic tradition of The Golem, and the creation of Adam, to that of Svengali and Trilby (in Trilby), or Frankenstein.

Macbeth (2015) is at its / his most interesting when seen through the prism of Banquo's life - which he then seeks to break, and splinter...
— THE AGENT APSLEY (@THEAGENTAPSLEY) October 3, 2015

**** We do not directly, audibly witness these words in the film, but perhaps we already know that Macbeth demands information (openly calling it a form of conjuration), even at the cost of chaos – which is what the film, by other means, has us see, sense, and feel :

I conjure you, by that which you profess,
Howe'er you come to know it, answer me :
Though you untie the winds and let them fight
Against the churches ; though the yesty waves
Confound and swallow navigation up ;
Though bladed corn be lodged and trees blown down ;
Though castles topple on their warders' heads ;
Though palaces and pyramids do slope
Their heads to their foundations ; though the treasure
Of Nature's germens tumble all together,
Even till destruction sicken, answer me
To what I ask you.
Act IV, Scene I, 50–61

Unless stated otherwise, all films reviewed were screened at Festival Central (Arts Picturehouse, Cambridge)
Posted by The Agent Apsley at 16:47 No comments: