This is a review of Sixteen (2013), as shown at Bath Film Festival 2013 (@BathFilm) and thanks to a complimentary ticket from the festival 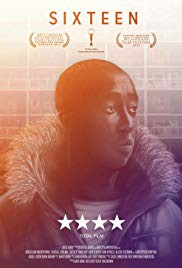 
Wrongly, Sixteen (2013)* felt like it might be just too many things jostling for screen-time, which usefully put one edge – as to whether the enterprise would succeed – in the way that Jumah (Roger Nsengiyumva) must feel, and which John Bowen’s effective score accentuates (more on that later), for we have :

* A child soldier from Congo (who, as with many who have been in conflicts, probably has something like post-traumatic stress disorder (or PTSD))

* The love between a mother and her adoptive son

* Petty crime that has got out of hand


I swear that these do all fit together, and the unifying force is that soundtrack, which – as I put it in the Q&A – moves from disturbingly menacing to uncertain to sensual, when Jumah is asked to give his girlfriend Chloe (Rosie Day) a haircut, and back again, and which has an otherworldly quality to it : writer / director Rob Brown, who has worked with Bowen before, said that what he was after with scoring the edit was understood by Bowen, but that a sound such as that of Brian Eno and others had been mentioned. (I also heard Peter Gabriel's sort of open chords.)

In my opinion, the score tautened one’s awareness of the past that Jumah brings with him, and fed a sense of how he must be feeling into what we saw – someone being attacked might have one resonance (in, say, a film like Witness (1985)), but here we were aware (from sources such as War Witch (2012)) of the brutalizing world in which he had been forced to live. Except with very low-frequency growling, it did not mask its presence, and it partly distanced us from the early shock of some events, just as Jumah might have been in situation but not wholly present in them.

This sort of character was what Brown said that he had been aiming at, and which had drawn him in other film projects, effectively someone who had certain experiences and for whom living is difficult. As a foil to him, Day’s portrayal of Chloe was perfect – one sensed that, beneath her confidence, she did, as she told Jumah, want to be helped to feel positive about herself, and that she, if she can be helped in return, has resources of trust and validation that can help him heal.

Above these two, Rachael Stirling, as Jumah’s mum Laura, acted exceptionally well how she sought to bear with him, from the moment when she comes into his bedroom and Chloe and he are resting in each other’s arms to wanting to hold him back, and not knowing what he might do : that moment when he decides who he is and what he wants feels so unstable, and we cut away to her with no certainty what might happen.

The atmosphere of the film, with this excellent score, is electric, and one even feels that, as with War Witch’s title-character Komona, there may be some sixth sense in play for Jumah to be in the right place several times. This is not an easy ride much of the time, but that tactile quality of the hair, and all the feeling that comes from the other great film with that theme, Patrice Leconte’s The Hairdresser’s Husband (Le mari de la coiffeuse) (1990), plus the tenderness between Chloe and Jumah, soften it sufficiently.

* There are two films this year with that title, so IMDb designates this Sixteen (I) (2013).

Unless stated otherwise, all films reviewed were screened at Festival Central (Arts Picturehouse, Cambridge)
Posted by The Agent Apsley at 15:36 No comments: