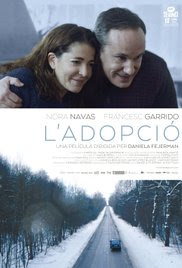 This is a Festival preview of Awaiting (L’adopció) (2015) (for Cambridge Film Festival 2016)
Even down to the name Natàlia (originally meaning ‘Christmas Day’) and also when in the year the film is set, one could be tempted to make much of clear elements that parallel the account of The Nativity in Matthew’s gospel¹. Although acknowledging them, since they may inform one’s understanding of Awaiting (L’adopció) when reflecting on the film afterwards, what director Daniela Fejerman primarily seems to have on her mind (with her co-writer Alejo Flah) are questions of what, emotionally and otherwise, something is truly worth, and whom one trusts – and why.

Which is not to suggest that Awaiting conveys itself as applied moral philosophy (or sociology) : no more so than when those matters figure, in dramatic terms, in the films of Ken Loach (e.g. Jimmy’s Hall (2014)), or in the Dardenne brothers’ Two Days, One Night (Deux Jours, Une Nuit (2014)), which are also set in a different stratum of society – please see the following paragraph. Rather, these are questions in life that we can find ourselves asking at any time, such as :


What am I willing to continue to do, even given what I have already invested of myself ? 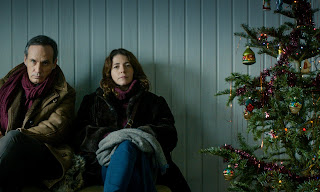 Unlike Loach, which is perhaps typical of Catalan cinema, we are concerned with a middle-class couple, but we see still how pressures, both from within the wider family and from the situation to which Daniel (Dani) and Natàlia have committed themselves, feed each other, and affect them both. In a film such as We All Want What’s Best For Her (Tots volem el millor per a ella (2013), which director Mar Coll brought to Cambridge Film Festival in 2014²), some of us may already have had the chance to see the remarkable psychological insight that, then as now, Nora Navas (Natàlia) brings to her roles. (There, her life has been turned inside out by the emotional and relational consequences of (what we learn was) a car accident.)

For this quality, in Awaiting, Nora Navas is well matched by the portrayal of Dani by Francesc Garrido, who runs a gamut of emotions with her – in his case, from joy, desire, and impishness to angry frustration, resignation, and despair. We have a strong sense of a pair whose understanding of each other, and patience with and belief in Lila (whose local agency has arranged their visit), is put to severe strain by what happens after they have travelled to Lithuania in the expectation of being able to adopt a child (a son ?). 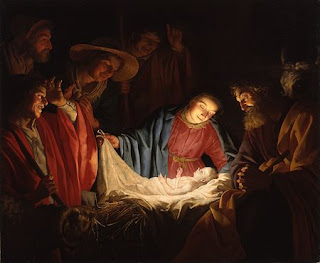 It has to be said, for those who need everything explained to them, that - in common with lacking a complete explanation of the world of Geni (Nora Navas) in We All Want What’s Best For Her - they will look in vain for anything other than what can be inferred or hazarded about that which we see : for example, what Dani and Natàlia’s positions in life are, back in Catalonia (Catalunya in Catalan), or why there is a difficult relationship between Natalia and her father (Jordi Banacolocha), which (as Geni also does) she is obliged to start addressing...

Uniquely, just after the visuals behind the credits have imparted a sense of passage into coldness and otherness, we are privileged with a knowledge of the sort of difficulties that have been left for Dani and Natàlia to face - momentarily, we are prepared for the symbolic emptiness that is conveyed to them by the slatted belt of the carousel at baggage reclamation. When it stops, all that is there – as they look into the hall behind them (and as Juan Carlos Gómez’s camera gradually pulls back to show us) – is a perfunctory Christmas tree : the principle is immediately established that perhaps they need to wait to see what is happening.

Even so, at first we see that they are trying to influence what is happening – despite the fact that the airport official and they are both uttering words that the hearer(s) do not understand – except that, just when we may be noticing the repetition, Natàlia identifies it to Dani³. There is then a sense of their stepping back, and reclaiming what they share – what they have together, as an outlook, a sense of humour, and so on.

I have a good feeling about this ~ Natàlia

So, after meeting Lila (Larisa Kalpokaitė), being driven to their flat, and, when they are alone, the playfulness of their interaction early on, they take drags on a cigarette that they smoke in common - there is a continuing lightness in the interplay (before going on to have more fun with what Lila said, telling them that they need to dress to impress) :

Dani : The coffee is disgusting.


The adeptness of the cinematography is an essential ingredient in what makes this a film to cherish, but the camerawork is enmeshed in the other qualities of the film-making : so, Gómez edges in, or comes around, carefully and in order not to intrude on our attention except for effect – just as when editor Teresa Font, at a few significant moments, uses montages, with fast-cutting between shots, to reflect the changing contours of emotions as different as buoyant pleasure and trying to meet a need for consolation.

We’ll leave it up to God ~ Dani 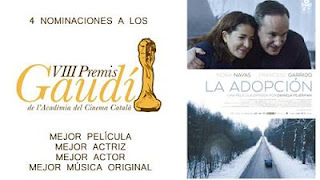 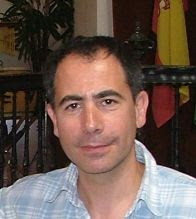 Such contrasting aspects are implicit in Xavier Capellas’ score for the film (Capellas both directed the ensemble and played piano for the soundtrack, which is nominated for Best Original Music at the VIII Gaudí Awards, and the film for three other 'Gaudís'), and the way in which his original work of composition is used apart from, and yet in harmony with, the simplicity of solo piano - numbers from Béla Bartók’s Gyermekeknek (For Children⁵), feelingly played by Dani Espasa :

On the drive out of town, to the orphanage, there is the return of what is most easily characterized as the sadness-tinged theme of the title-music, except that – above sounds of what resembles cembalon or zither, but may well actually be that of a domra⁶ [the link is to YouTube (@YouTube)] – we hear how it is opening out into euphoria, led by violin (María Roca), but then through the accordion-playing of Josep Vila Campabadal.

In all of these deep changes and sometimes difficult plunges in the feelings, we are with – but fearful for (as we are for Nora Navas, as Geni, in Tots volem el millor per a ella [We All Want What's Best For Her]) – Natàlia and Dani, and whether what they want will heal them ; or harm them. What takes place with Bill Murray, or Scarlett Johansson, in Lost in Translation, is still a long way from being wholly dissimilar, as to cultures 'clashing', but the drama is somehow more akin to that within hearing what befalls the The Holy Family in Egypt (or Bethlehem)...

There are two scheduled screenings of L’adopció (2015) [the link is to the #CamFF web-page for the film] during Camera Catalonia (the links below are to the booking-pages for each screening) :

The other four films in this Festival's Camera Catalonia are also warmly commended (the link is to the strand's own #CamFF page) - other previews to come very soon... but meanwhile there is :

² Mar Coll was the guest of Ramon Lamarca, who has now curated Camera Catalonia for five years running at Cambridge Film Festival (alongside his interests in 3-D and / or Retro cinema), for two Q&A sessions after screenings of her film at the Festival. 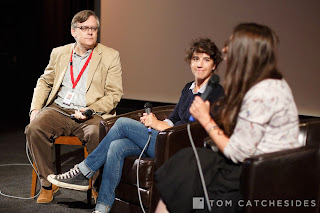 ³ The first of several repetitions (and questions of who can follow the words of whom), which are a small hint at Lost in Translation (2003), but, except on the surface, this film goes on to speak of quite different experiences, and in its deepest moments.

⁴ This year, Camera Catalonia contains Sex, Maracas & Chihuahuas (Sexo, maracas y chihuahuas [a link to the film's IMDb page]) (2016), a documentary about 'the incredible life of the musician Xavier Cugat'. From Cugat’s era, by contrast with now, we may have heard accounts of how Gilda (1946) was put together ‘along the way’, or seen how the zaniness of Howard Hawks’ Bringing Up Baby (1938) also provides evidence of his (in studio terms) ‘unconventional’ methods of developing the film on set. 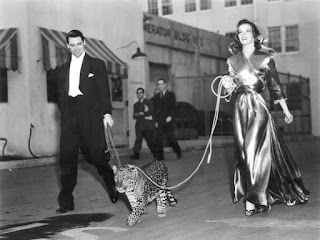 For his talk during Cary Grant Comes Home For The Weekend Festival 2016 (@carycomeshome), Mark Glancy looked into some of the film's documentary and other sources from the production, gleaned from researches at RKO.

⁵ From Vol. 1 (Sz. 42, BB 53), seven or eight pieces from a set of eighty-five, written for those studying the pianoforte. (Unlike Mikrokosmos, Sz. 107, BB 105, which is probably more famous, these are not graded exercises, and the pieces are not technically very difficult.) Plus we significantly hear the Allegro molto e mesto [played on YouTube (@YouTube) by The Matangi Quartet] from Beethoven’s String Quartet in F Major, Op. 59, No. 1 (the set of three that are together often called ‘the Razumovsky quartets’).

⁶ As is hardly unusual with IMDb (@IMDb), the instrumentalists, or their instruments, are imperfectly credited in listing the ‘Music Department’, because Eduard Iniesta does not, according to L’adopció’s (Awaiting’s) closing credits, just play guitar (guitarra), but bouzouki and domra as well, which are listed first… (One could describe the domra [the link is to YouTube] as related to the lute, but from Russia, and with three or four metal strings.) 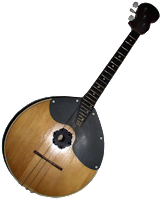 Unless stated otherwise, all films reviewed were screened at Festival Central (Arts Picturehouse, Cambridge)
Posted by The Agent Apsley at 05:11 No comments: