In three Tweets, a response to Nancy (2018)
More views of - or before - Cambridge Film Festival 2018 (25 October to 1 November)
(Click here to go directly to the Festival web-site) 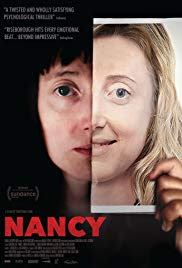 Playing on Andrea Riseborough's physique as a sort of Scissorhands, and since she is maybe too close to the project as its first-titled producer, Nancy desires to flip the Hitchcock.

Not least in terms of trust, the principal characters do / do not do various things that they have little reason, except to give us a plot and hence a film, to do :

This includes the script-writers, who choose to have an academic who somehow's published just one book in decades.

Unless stated otherwise, all films reviewed were screened at Festival Central (Arts Picturehouse, Cambridge)
Posted by The Agent Apsley at 18:37