This reviews a concert given by Seraphin Chamber Orchestra, under Joy Lisney
More views of - or before - Cambridge Film Festival 2016 (20 to 27 October)
(Click here to go directly to the Festival web-site)


This is a review of an inaugural concert given by Seraphin Chamber Orchestra in the chapel of King’s College on Sunday 12 February 2017 at 8.00 p.m., in a programme of works by Haydn and Tchaikovsky, and including a world premiere by Benjamin Graves, conducted by cellist Joy Lisney

It is almost inevitable with modern compositions that one either runs out of sections, and has to reappraise whether what seemed like a pause delineated any more than a long rest, or the piece ends, when one is expecting more… (It was the latter, but no matter.)

I confess that this was my experience when Joy gave Benjamin Britten’s Suite for Cello No. 3 at Kings Place (@KingsPlace), a piece that I do not know well, and which one can hear and see Joy playing then here (on YouTube) :

The start of the work had aetherial, ancient tones, with subtle pulsings in the midst, and it felt that we were looking to ‘Max’ (Peter Maxwell Davies) with the use of layering, and of radiant and discordant elements. When we heard the leader with obbligato violin, alongside tremolo effects that shimmered, this was perhaps where the second Folk Song began :

At any rate, there was ‘a rise’, as of cavorting seals (it becomes hackneyed to talk too much about keening, but there was that about it). Probably the third of the Folk Songs began with rhythmicity, and ‘banjo-style’ cellos, and one appreciated the effect of divided first and second violins, and the move in and out of the minor, but all with a regal air. However, although we appeared to come to a sonority, the piece did not quite end on it, but with other-worldly qualities and effects.

The element of surprise… caught the audience by surprise, but the skill and care of Seraphin Chamber Orchestra (@SeraphinCO) in this composition was easily recognizable, and heralded a full hour of accomplishment and finely conveyed emotion under Joy Lisney’s (@JoyLisney’s) baton (or, in what followed, direction from the cello).

Not that one would expect the opening Allegro moderato to be disrespectful, but this was treating ‘Papa’ Haydn with initial reverential respect, against which we could accord and register the flourishes on oboes and horns. Then, Joy signalled a boost in the orchestra’s volume, and we gained a sense of the echoic nature of Haydn’s writing.

In Joy's approach to his solo melody-line and its ornamentation, its beauty was paramount, and we could then, as the movement developed, appreciate the crispness of Christopher Xuereb on bass. From Joy, this was a gracious performance, with her facility at the service of bringing freshness to the interpretation. At times, she would wait, as the rest of the ensemble had a tutti passage, and she could no doubt have been content at the very great competence of Seraphin Chamber Orchestra, with its balanced and fully confident sound. We could next movingly see her feeling her way, and, come the cadenza (which one guesses may have been Joy’s own, thematically-oriented one), there was a real quiet in the chapel of King’s College, before the orchestra joined her for the close : there was not showiness here, but an appropriate response to the mood and style of Haydn’s work.


The Adagio had an understated opening, and we then heard the plangency of the oboes. Joy herself was exercising restraint as to being expressive at this stage, and then a moment of sweetness came forth – taking the simplicity in the melody-line at face value, with its honesty and clarity. In the cadenza, there were singing notes, and colours that allowed the ensemble to come quietly back in : this is not the Concerto in which to wring every essence of the Adagio for feeling, but one where its content and purpose are to serve the faster movements.

Joy allowed the closing Allegro to luxuriate in the rich loveliness of the writing, with its feel of a rondo, and horn-calls. She was clearly working very well with the orchestra, whose rehearsals had been much publicized on Twitter (at @SeraphinCO), and enjoying the pleasure of this finale. Haydn briefly modulates to the minor, and Joy, either side of highly proficient runs, brought out some momentarily forceful bowing to match the atmosphere. A brief moment of hearing the oboes without the solo voice, and then the delightful and well-received conclusion of the work, full of energy and life.


Those who knew the work, and its demands, would have called Joy back more than twice in reacting to this work, but the applause was generous for what one judged the composition of the audience to be (and, likewise when the time came, the Tchaikovsky could have been acclaimed for longer, and the impressive quality of this playing in a notoriously demanding acoustic).

The opening statement was well paced, and had its necessary clarity, with Joy showing that it was not sufficient to play this music, but for it to speak and to unfold. There was some difficult cello-writing here, for example, but Seraphin Chamber Orchestra had assurance, and a good bass-line, as well as a clear string-sound : their conductor was confident, and appeared to be giving them confidence. With the reprise of the opening gestures, there was a good balance, which we were to notice further, as the Serenade continued.


The movement marked Valse seemed essentially carefree, but only mildly jaunty, and Joy made good use of ritardando for punctuation : with a work such as this, which we think that we know, but where we actually cannot place some parts of it, we need holding back, for our pleasure, in the familiar moments. Joy’s beating of time was gentle and leisurely.

In the Élégie, she had the orchestra carefully present the initial material, and slowly using its measures for expressivity : for it is here, if anywhere in the Serenade, that Tchaikovsky is likely to feel unknown to us, and we need shape and structure most then, not for a conductor to let it drift.

With the first violins against pizzicato strings, we began a gradual build, and then time to decelerate and to breathe. Again and again, Joy paced this movement, and brought us to a lovely hush, as of dying embers. Still aglow, the Larghetto was still being given due weight, and then gradually we came into a coda, with a pulse, and simple scales, to conclude.


The Finale (Tema russo) was in this same, quiet place, but more solemn, with Joy taking it steadily, and making us come again to this music, which was now familiar (in the way that our selective attention, or our listening that has been directed to what we know, the Élégie is relatively uncertain for us). Yes, we came into a little fizz and fireworks, but there was more to it than that, and Joy showed, again, that she had a sense of vision for this piece. After some luscious writing for her fellow cellists, we ended as we had begun, but with the theme’s statement now having greater poise and purpose…

For those who knew the Haydn Concerto (or the Serenade for Strings), we wanted just one more curtain-call to express our appreciation !
— THE AGENT APSLEY (@THEAGENTAPSLEY) February 12, 2017 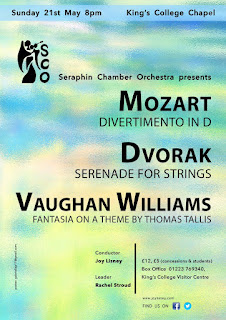 Now reviewed here, the ensemble's second concert (as above), also in this venue

Just one thing that could possibly have different : especially last year, when concerts during Easter at King’s were held at the West end (and especially with period instruments), the work of a cold building on strings was noticeable. Just maybe, after the third movement of the Serenade for Strings, taking a chance to re-tune might have been worthwhile ?

Unless stated otherwise, all films reviewed were screened at Festival Central (Arts Picturehouse, Cambridge)
Posted by The Agent Apsley at 05:14