HAMM : When you inspected my paupers. Always on foot ? / CLOV : Sometimes on horse.*

(Click here to go directly to the Festival web-site)


This is an account of a special screening of Horse Money (Cavalo Dinheiro) (2014) plus Q&A with director Pedro Costa at The Arts Picturehouse, Cambridge, on Tuesday 22 September 2015 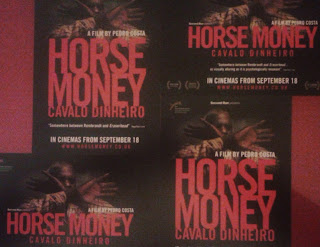 Some people in the Q&A reported that they expected to have to re-watch the film to follow what was happening : they therefore seemed to assume that seeing Horse Money (2014) again would satisfy that ‘need’, not that it is overtly denying such attempts to do so, with its re-enactment of experiences that, because they are deemed not to be ‘normal’ (or even to be dangerous), are usually labelled as psychosis and lead to a diagnosis such as schizophrenia :

When members of Ventura’s family are en masse at the foot of his bed, and one even sits on it, it is likely that they are there for him, but not that they are otherwise present. And, when he is almost naked in subterranean depths of great and striking beauty, it is unlikely that he is literally there, but forever being brought back.


A Beautiful Mind (2001) had us credit John Nash’s world, even if it is perhaps shown to us a little fancifully, and ‒ because it is to make a Hollywood necessity of contrasting it with ‘the truth’ ‒ in such a way that we understand it to have been delusional. Horse Money does not make those concessions to our understanding, but it is implicit in what it does that to ask to follow what happened, on a second viewing, is to expect that Vitalina, in what she says to Ventura (or vice versa), is communicating solely on the ostensible level of her actual words, not that the meaning lies in the interplay, or that the exact interplay ‒ any more than the dialogue in a play by Pinter ‒ may never have happened.

Which is where a connection lies with the work of Jeff Wall, to whom, without disagreement (and with seeming acceptance), Pedro Costa was referred in the Q&A.


This is the obvious link between http://t.co/48ekO34bT0 and the photography of Jeff Wall, but there are others... pic.twitter.com/BsPsat7TlT
— THE AGENT APSLEY (@THEAGENTAPSLEY) September 24, 2015


For those who had been at Cambridge Film Festival (@camfilmfest), and with Ventura’s experience, Horse Money could have made unpleasant and uncomfortable viewing, as a reminder of sadder days of constraint and forced compliance, and of the perfunctoriness ‒ here reduced to a dull formula ‒ of some psychiatric interviews.


For @CamPicturehouse, @GandolfiLoreta hosted director Pedro Costa for a lively accretion of dialogues about the history and nature of cinema
— THE AGENT APSLEY (@THEAGENTAPSLEY) September 23, 2015


Still, the film cannot well be taken literally (even if Pedro Costa wants to call his film a documentary ‒ so he replied to Loreta Gandolfi (@GandolfiLoreta), who was hosting the Q&A, and who had first, to her surprise, seen Horse Money at a documentary film festival), and that aspect, together with what is characterized in the following question (which was put to Costa), has the likely effect of achieving the worst of both worlds :


Is there a danger in having composed so many shots so beautifully that an already oblique set of experiences becomes over-stylized ?


In other words, for those who do not know this world, Horse Money may be impenetrable (and may just make them believe that they ‘missed something’, and will gain more on a second viewing), whereas, for those who do, it might seem at too much of a poetic remove to do more than remind them, in an artistic form, of their past, but without telling them anything that they did not know from their own hospitalization. This is what is suggested by asking whether it may achieve the worst of both worlds.


As to starting to watch the film at Cambridge, and then finding the emotion too painful (even after obtaining ‘a stiff drink’) to watch beyond around thirty-five minutes, obviously one was able to prepare oneself better for Horse Money, and then take it for what it was ‒ moving from [assertions of] the destruction of family life and livelihood** to wider perspectives of post-industrial decline, the earlier part of which theme was referenced in these #CamFF Tweets :


-> Dinheirois amongst the list of dead and dying - as at the end of Moran's part of Beckettt's novel Molloy, or in his play Endgame ?
— THE AGENT APSLEY (@THEAGENTAPSLEY) September 10, 2015


Pedro Costa clearly finds working with Ventura compelling (even seductive, for, in this connection, one is reminded of Calvet (2011)), and he told the audience how he talks to Ventura about his life and thoughts, but uses those conversations to ground his poetic approach to the text and, ultimately, to making the script with a film-crew of just three (of which he is one).

One has to agree that the ‘look’ of his film is, likewise, a clear reaction against so much film-making that is not cinematic ‒ and, of course, Costa is right in this (and in striving for a visual quality in his work), and that such films give scant regard to the history and early achievements of film. Whether, though, we find Ventura (despite all his perspective on life) a persuasive voice remains to be seen :


Some might find that distilling / channelling Ventura through Costa and back into Ventura may have made what we see and hear too rarefied ?***

** In recognition of the content of the Tweets that follow, Costa was presented with a copy of the Calder edition of Beckettt’s trilogy (Molloy, Malone Dies, The Unnamable). 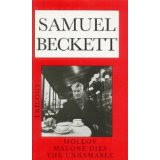 
*** Even if (because ?) Costa says that he prefers Spinoza to Wittgenstein (he also said that he had slept in the latter's bed at Trinity)... ?

Unless stated otherwise, all films reviewed were screened at Festival Central (Arts Picturehouse, Cambridge)
Posted by The Agent Apsley at 06:32