This is a Festival review of A Young Patriot (2015)

From the audience, the first question in the Q&A for the director of A Young Patriot (2015) was from The Agent, about why we see so much of Changtong as he is taking photographs (having failed to get a place at Chengdu University the first time, he is taking a degree in photography), but only have two glimpses of his photography : two images, in passing, on a screen, and a glimpse of the photos that he is sending by post to the school, in Shanxi province, where his fellow students and he taught for a few weeks in the summer.

Haibin Du said that he realized that he had not shown much of Changtong’s work. However, the answer, which he timed so as to be amusing, was that the subject himself was more interesting than his photography. Indeed, he got a laugh by saying that, but did not thereby allay one’s doubts about the ethics of his practice in filming :

The question had not been couched as one about exploitation, but it, and the answer given, imply that it could have been*. For, at least three times, we see this film’s subject (its so-called young patriot) expressing himself unnecessarily candidly through the medium of drink. Yet, apart from his younger brother, who leads him away through embarrassment at what Changtong is saying about him (not that, on any occasion, others are not embarrassed at Changtong’s naive dogma and repetition), no one is there to intervene and stop the filming – and could a man as wildly idealistic in a way to rival the character of Dostoyevsky’s Prince Myshkin (in The Idiot – brilliantly adapted for film, in Estonia, in a screening seen at Cambridge Film Festival 2012) have given any meaningful consent ?


This film, in seven chapters, brought out the fact that the cinema-seats in the Vimeo-sponsored Screen 2 at the Showroom cinema in Sheffield are hardly the most luxurious in the world : it was at least ten minutes too long, and irremediably chronological, even if it did sometimes juxtapose places. It was mainly – apart from the pivotal excursion to Shanxi (though not treated as one by the film-maker : please see below) – set in Sichuan province, in Pingyao and, as mentioned, Chengdu.

For a subject who was almost romantically attached to Mao, liking to sing (well, almost croon, in a higher pitch ?) his revolutionary songs**, maybe it made sense for us to have opening shots of, seemingly, a fading memorial to those times (unannounced, and wrongly identified by the producer afterwards, who also acted as translator, as Datong). If we had dwelt on those images and what they might have signified, could it have been a better film, and might we not have focused, and been more helpful in not doing so, not on Changtong’s extreme form of (historical) patriotism, but rather on his finding himself in modern China (if on him at all) ?

Several times, the film alludes to Tian'anmen Square, and to an (unstated) background, in the West, of knowing what that name means and what happened there : from the first, Chengtong is aware that there had been a protest, but believes that it had had a humane, even benign, outcome :

Not uniquely for a film-maker, Haibin Du chooses not only to leave Changtong in his ignorance (and, in a film that he later said that he has hopes might be seen in China, he does not inform the viewer), but also to concentrate on it as an ignorance that is specifically his – as part of his great dedication to Mao, and what he understands of the history of his country through that lens. That said, in a scene where we see Changtong and fellow students reciting words and singing in a vigil for an apparent anniversary of Tian'anmen Square (the massacre happened in 1989), it is clear that meaning has been generally lost or suppressed about it, and that they are just as much in the dark as he about what they commemorate.


Clearly, it would have been a different film, and not that of Haibin Du, to consider wider attitudes to, and understanding of, the past, but maybe film-makers have a duty not to take ‘the soft option’ in choosing their subject (or how to portray it : however important the topic of orca in captivity may be, does Blackfish (2013), for example, lose the opportunity to tell a totally coherent story about it ?). To allow oneself to be attracted to a very colourful figure such as Changtong may be normal, and almost necessarily full of emotional conflict and with scope for development, but perhaps a maker of documentaries needs to be aware of what it truly is about a subject that glisters to know it from gold, and to have a full appreciation of other stories that could have been told – or of a different construction to have been put upon this one.

Did one need to have asked what simply following Changtong’s story actually says about his lack of self-knowledge (and his growing and eventual disillusion, precipitated by what happens to his family, because of the Chinese equivalent of compulsory-purchase orders, and how resistance gains no benefit) ? In psychological terms, his adherence to a partial account of the co-eval past, in the kind of patriotism that he has adopted, always had to mean something more than an attractive premise for a film :

From the first, Changtong was really crying out for attention (if not unavoidably for that of a film-crew), but the film itself never seems to have engaged*** with what that was or signified (except that he almost had to be heading for a fall – which brings us back, again, to his naivety and whether he was a fit person to give consent). In relation to other Chinese people of his age, 1989 was (just about) part of his life, but not one of which he could have had direct experience or comprehension. Of course, the film did not have to give regard to the wider question of the state of knowledge, but the fact is that it did not.

It also, by not treating the events and experience of being in Shanxi as central to the chosen arc of Changtong’s story (although, cinematographically, it is obviously where the film is most alive, by creatively, and truly strikingly, directing the camera to all forms of local life – and, likewise, showing the difference that the students had made as volunteer teachers), held out for that time when life would break in on his lack of self-awareness, and leave him more bitter (maybe even depressed). That said, the film probably did not owe it to Changtong to show him his vocation (in seeming to enthuse the young village children quite effortlessly), or the fall for which he was heading.

We did hear, when asked about whether he had seen the film, that he had, somewhat nerve-wrackingly, been with its director at the back of the screening in Hong Kong. He told us that Changtong had borne it with what sounded like equanimity, seeming to have regarded it as a separate entity. Which maybe it is – maybe too separate from what could have been distilled from his life, not as apart from, but as part of the generality of modern China’s relationship with its own recent history ? 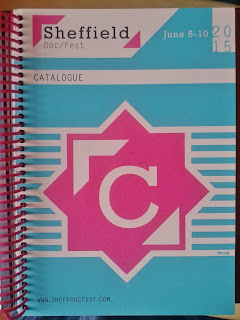 * The question had also said how Chantong’s early flag-waving and declamation (in an old uniform of The Red Guard) had come into its own by being a genuine inspiration to the young children in Shanxi, and had even proudly bought and started flying the starred Chinese flag. (Not surprisingly, another question elicited being told that it was the ostentatious behaviour that had interested Haibin Du in his subject – character, not photographic aspirations.)

** By heart, and seemingly moved by their sentiments when he had finished a rendition (although one somehow doubted whether he could have laid his finger on what they really were, and their relevance to Mao’s days of struggle).

*** Inevitably, with hours of footage reduced to just a couple, one knows relatively little even of the onscreen contact between director and subject, let alone at other times.

Unless stated otherwise, all films reviewed were screened at Festival Central (Arts Picturehouse, Cambridge)
Posted by The Agent Apsley at 18:39